SwagCricket
Home Top 10 4 Indian cricketers who won man of the match award in the... 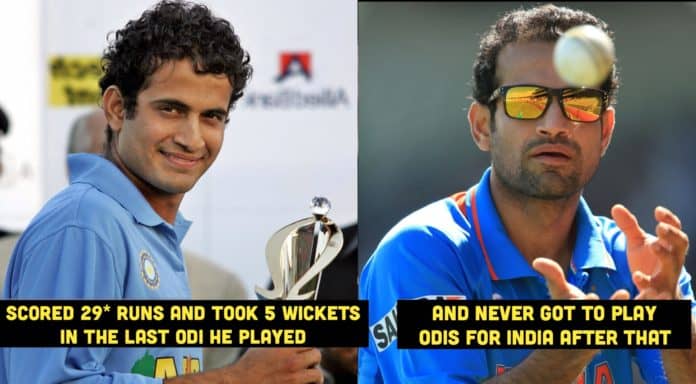 The Indian cricket team is at its peak right now. The Men in Blue have formed a fantastic unit now as the growth of IPL and domestic cricket has now ensured that they have enough resources in every department. First, there was a shortage of fast bowlers in India.

The team management had to rotate the same bowlers in and out when they did not perform well. However, right now, India has multiple fast bowlers who can clock over 150 KMPH on the speedometer. Likewise, batting trends have also changed.

First, the team management preferred the batsmen who could build long innings. But now, the preference is given to those players who can smack sixes from ball one. These modifications in the game have often had an adverse impact on the players.

Also Read: 5 players who failed to find their place in the Indian Team despite of their brilliant performances in U-19 WC Team

The backroom staff and selectors tend to drop a player from all formats even if he underperforms in any format. Here’s a list of the 4 Indian cricketers who had won the Man of the Match award in their last match of a particular form of the game. Still, they never played in that format for India because their form dipped in the other forms.

Baroda-based all-rounder Irfan Pathan will go down in the history books as one of the most underrated all-rounders of all time. The left-handed all-rounder could swing the ball in both directions and also play some handy knocks with the bat. Unfortunately, the luck factor did not favour him.

Pathan often found himself out of the team because of the team combination issues. The team preferred to include a spinner in the team ahead of him.

This was the reason why Pathan had to give up his place in the ODI team even though he won the Man of the Match in his last game against Sri Lanka. The left-arm seam bowler took 5 wickets in that game besides playing a match-winning knock of 29 runs.

Just like Amit Mishra, Pragyan Ojha’s last match for India was a very memorable one. Incidentally, it was also Sachin Tendulkar’s retirement match. Pragyan Ojha stole the spotlight in that match with a fantastic spell that helped India win by an innings.

Ojha was MS Dhoni’s favorite bowler then. However, the ICC suspended him for his illegal bowling action.He had earlier reported for suspect action.

The left-arm spinner worked on his action but lost his effectiveness. Thus, even though he became Man of the Match in his final Test, he never donned the white colors for the nation.