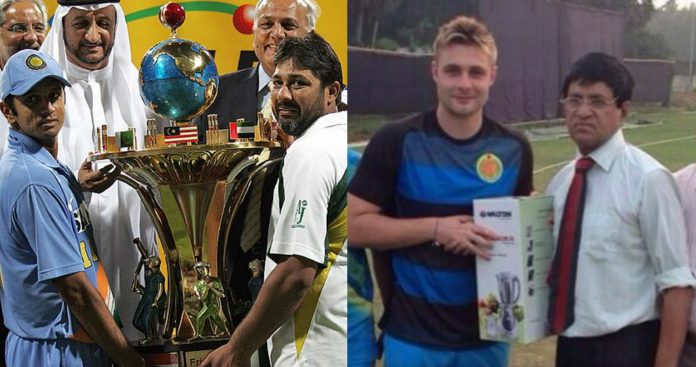 Cricket has become a global sport in the last few decades. Earlier, there were only a few countries playing international cricket, but thanks to the ICC’s hard work, now cricket is played in almost every part of the world. Test-playing nations are considered the superpowers in cricket because of the good financial condition of their cricket boards. The players of these teams have massive deals with the board and also the team gains excellent sponsorship.

However, on some occasions, the organizers have to take some decisions keeping the sponsor and the budget into consideration. We have seen cheques, motor cars, and other grand things presented to teams and players in presentation ceremonies, but here are the six weirdest trophies and awards in cricket history that surprised the world.

India, Australia, and New Zealand participated in a tri-series back in the late 1990s. The tournament was called the Coca-Cola Cup and India emerged victorious in that series.

The Indian team received a giant Coca-Cola trophy with a bottle cap design. The trophy was designed keeping in mind the sponsor of the tourney.

Pakistan and Australia have played much cricket against each other in the last few years. In a T20I series played in 2018, Australia’s tour of Pakistan drew everyone’s attention for a surprising reason.

The sponsors of the series TUC Biscuit manufactured a Biscuit Trophy. The photos of Aaron Finch and Sarfaraz Ahmed carrying the trophy went viral on the internet.

DLF is one of the most well-known companies among the cricket fans because of their involvement in the IPL. DLF sponsored the IPL for multiple seasons before Pepsi took over.

DLF had also sponsored a series between India and Pakistan in the year 2006. Team captains Inzamam-ul-Haq and Rahul Dravid’s photo with the giant trophy shows that DLF was their sponsor.

Pleased we won my first match 4 Abahani today. Have 2 say I have never been given a blender 4 getting MOM before! pic.twitter.com/BkiycrpJgu

Dhaka Premier League was a T20 league based in Bangladesh that also featured the foreign T20 stars. Luke Wright was one of the biggest names playing in the competition.

And when Wright starred for his team in the Dhaka Premier League, he got a blender in the form of a Man of the Match award for his brilliant performance.

Often there is a huge amount of pressure on the players in the T20 leagues. They need to overcome that and play their natural game in order to help their team win.

Eoin Morgan did the same in the Dhaka Premier League and then the organizers awarded him with a rice cooker for releasing the pressure.

He received a bat grip and shoelaces in the presentation ceremony. Thus, these are the six instances when the players and teams received weird awards and prizes in cricket.