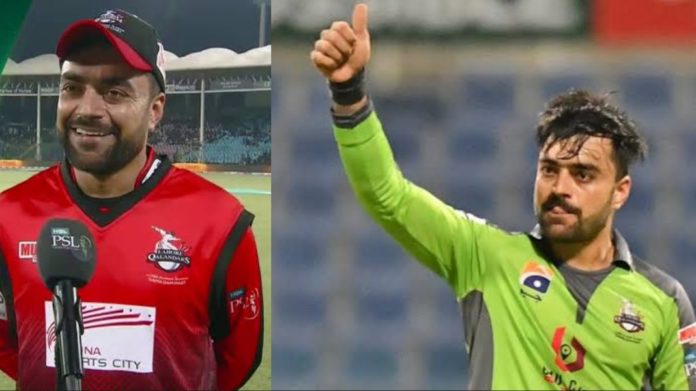 Lahore Qalandars leg-spinner Rashid Khan has shown how special the Lahore Qalandars team is for him by saying that he will come to play for the Pakistan Super League team even if they sign him in the lowest draft category available.

Many fans would know that the Pakistan Super League does not have a player auction yet. The organizers conduct a player draft every year, where the players are signed by franchises in various categories. The Platinum Category is the number one, and as per reports, a player earns around INR 1 crore in that category.

Star players like Babar Azam and Rashid Khan are present in that category. However, before leaving for national duty, Rashid said on the Lahore Qalandars’ YouTube channel that the draft category does not matter to him and he will play for the franchise even if his salary is the lowest. Here’s what Khan said:

Rashid Khan was an important member of the Shaheen Shah Afridi-led Lahore Qalandars team in their journey to the playoffs. However, he had to leave the season before the playoffs because of the Afghanistan cricket team’s ICC Cricket World Cup Super League series against the Bangladesh cricket team.

The Afghanistan cricket team failed to win a single match in the previous edition of the ICC Cricket World Cup, but now they will be keen to qualify for the 2023 World Cup directly and bring their ‘A’ game to the table at the mega event in India. It will be interesting to see how the team performs.