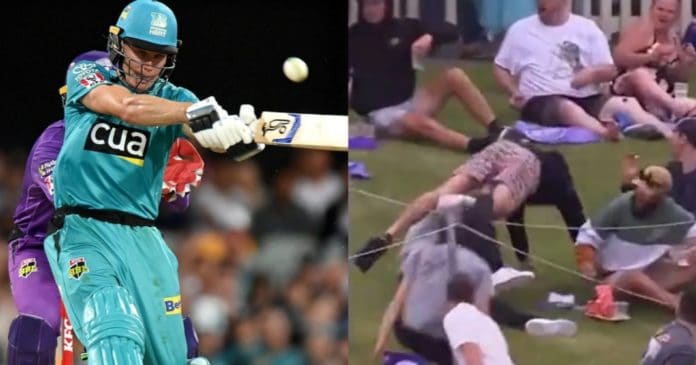 On Saturday, during a Big Bash League (BBL) match between the Hobart Hurricanes and the Brisbane Heat, a fan attempted to take the “best crowd catch ever” at the Blundstone Arena in Hobart, Hobart Hurricanes’ home ground.

The event occurred on the 2nd last delivery of the eighth over of the Brisbane Heat’s batting, as middle-order batsman Sam Heazlett thrusted Riley Meredith for the over the top six behind the square leg. With a wonderful diving attempt, a fan standing on the cliff side behind the boundary rope or circle, nearly pulled off the “best crowd catch ever” as termed by the BBL official social media.

Is this the best crowd catch ever?!
The Hobart crowd are outdoing themselves every single match!@KFCAustralia | #BBL11 pic.twitter.com/k5atqqNDGX

However, he failed to complete the catch as the ball managed to slip through his fingers and he collided with two other spectators, smashing their chips around. But the catch was instead was taken by another viewer watching the match behind them.

Talking about the match, the Brisbane Heat came out victorious over the Hobart Hurricane by 14 runs with Heat’s bowler Xavier Bartlett picking up 4 wickets from his 4 overs, and was awarded the Man of the Match.

Earlier, Matthew Wade, Hobart Hurricane’s skipper, had won the toss and opted to bowl first. Brisbane Heat managed to put up 150 runs on the board for the loss of 8 wickets in their 20 overs.

In chase of the 150 runs, Hobart Hurricane could only manage to score 136 runs from their 20 overs, also losing 8 wickets. For Hobart, also the identical situation repeated as Thomas Roger, batting at number 9, scored the most, 33 runs for Hobart Hurricane. While Xavier Bartlett took 4 wickets, Afghanistani leg-spin bowler Mujeeb Ur Rahman managed to get 3 wickets.