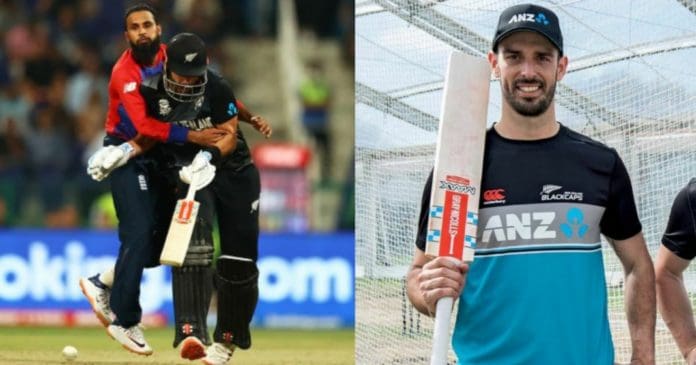 The ICC T20 World Cup 2021 happened last year in the Middle East. The top four teams of the tournament were Australia, Pakistan, New Zealand and England. They were the four semifinalists. England and New Zealand faced off in the first semifinal, where Daryl Mitchell impressed everyone with his batting performance.

Mitchell scored 72 runs off 47 deliveries, helping the New Zealand cricket team win the match and qualify for their maiden ICC T20 World Cup final. However, during the match, there was one moment, where Mitchell showed the Spirit of Cricket and won everyone’s hearts.

It was during the 18th over of the New Zealand innings. England batted first and scored 166 runs in their 20 overs. Chasing a target of 167 runs for a place in the final, New Zealand reached 133/4 after the first 17 overs. They required 34 off the final three overs, and every ball was important.

Leg-spinner Adil Rashid came in to bowl the 18th over. He bowled the first ball to James Neesham that was pushed back past the bowler. Rashid tried to stop it, but Daryl Mitchell came in his way. The ball went to the fielder in the deep, allowing the New Zealand batters a chance to take easy single.

Mitchell, however, said no for a single since he came in the way of Rashid. Here’s what he had to say about that moment after winning ICC Spirit of Cricket award:

“It’s something that we pride ourselves on as New Zealanders, the way we go about playing our cricket, and yes, the Spirit of Cricket side. Personally, I felt I got in the way and we wanted to win on our own terms, and didn’t want to be controversial in such a big game.”