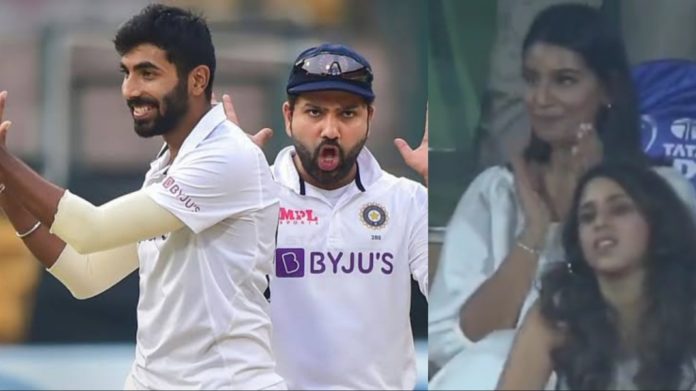 Jasprit Bumrah has become the new captain of the Indian Test team ahead of their ICC World Test Championship match against the England cricket team. When the year 2022 started, not many fans would have thought that they would see Bumrah leading the Indian cricket team in a Test match, but it has been an unpredictable year thus far.

A Twitter user recently shared a video from the 2022 edition of the Indian Premier League. In that clip, Bumrah’s wife Sanjana Ganesan could be seen clapping in the stands, while Ritika Sajdeh, Rohit Sharma’s wife was upset. Sharma’s wicket fell when the particular video was shot. It was a league stage match against the Rajasthan Royals in IPL 2022.

Now, in the current situation, Rohit Sharma has tested positive for COVID-19 in England, and Jasprit Bumrah has become the captain in his absence. So that old video has resurfaced with a Twitter user sharing it with the following caption:

Jasprit Bumrah reveals what MS Dhoni told him about captaincy

Speaking with the reporters at the pre-match press conference of the fifth Test, Jasprit Bumrah revealed that MS Dhoni told him even he did not have much leadership experience when he was made the Indian captain. Here’s what Bumrah said:

“I have spoken to MS Dhoni, he told me that he captained India straightaway, he had never captained anywhere else and he is one of the most successful captains. See, you always want the responsibility. You play cricket for that responsibility. When there is pressure, the taste of success feels good. I love to be in tough challenges and this is nothing different.”

It will be interesting to see if Bumrah gets off to a winning start as the Test captain of India. The match starts tomorrow at 3:00 PM IST.