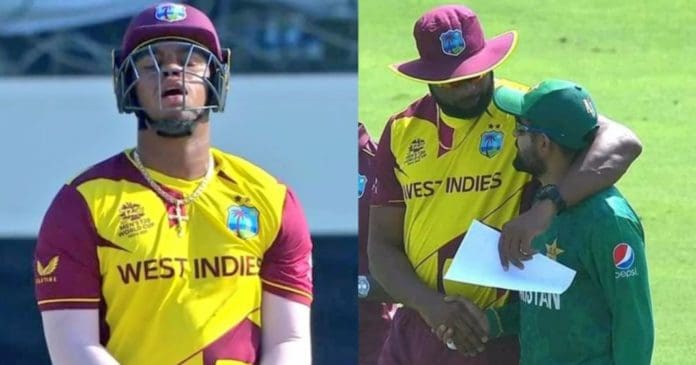 The warm-up games of the 2021 T20 World Cup have started. On Monday, Pakistan and West Indies clashed in a game in Dubai. While Pakistan won the game convincingly, it was a gesture by Babar Azam that took the cake of the attention. In this article, we take a look at how Twitter reacted to Babar Azam’s sportsmanship act in the warm-up game against West Indies.

West Indies was batting first and the two-time champions struggled to do well. The top-order failed and although the lower middle-order responded to the situation, the total of 130 runs in 20 overs was not sufficient.

It was re-iterated after Pakistan did not face any issues in chasing the target. The subcontinent giants took 15.3 overs to complete the chase, with skipper Babar Azam scoring a fifty. Fakhar Zaman at No.3, too, did well scoring 46 runs in just 24 balls.

Shimron Hetmyer is one of the in-form cricketers at the moment. Against Pakistan in the warm-up game, he was given caught behind of Hasan Ali’s bowling. However, the southpaw gestured that it was his neck chain that made the noise. Despite being aware of Hetmyer’s red-hot form, Azam made the decision of calling back the West Indian. Although Hettie did not do very well, Babar’s act caught the attention of many. Twitter, as well, reacted to the act:

Good sportsmanship today by Babar Azam & his team. Hetmyer was given out caught behind & was starting to walk back to the dugout. However Pakistan's skipper decided to call him back as a goodwill gesture after realising it was a wrong decision by the umpire #T20WorldCup #pakvsWi

Hetmyer wasn't happy with Caught Behind decision as He felt it was his "Chain Noise"
As He was walking off, Skipper Babar Azam called Him back.
Great Sportsman spirit shown by My Skipper ❤#BabarAzam #pakvsWi #T20WorldCup pic.twitter.com/U4lj7OQDmo

That was fantastic gesture from Babar Azam, called Hetmyer back when ump gave it out !

That was some good sportsmanship spirit shown by Babar Azam and #Pakistan by calling Shimron Hetmyer back after he was given out incorrectly. #T20WorldCup

Great Sportsmanship by #BabarAzam to call back Shimron Hetmyer even when he was given out with no reviews left. He was given caught behind but the voice was of the gold chain he wears!#Pakistan West Indies. #T20WorldCup21

Good Sportsman-spirit by Babar Azam and @TheRealPCB. Hetmyer was given out in a wrong decision and then Babar decided to call him back to bat in the warm-up match in #T20WorldCup #PakvWI

Such a nice gesture from #Babarazam to call back #hetmyer after he was given out. It was appeal for nick, however the sound came from gold chain which was worn by hetmyer. #ICCT20WorldCup2021 #WarmUpMatches #WIvsPak #pak #WestIndies #crickettwitter