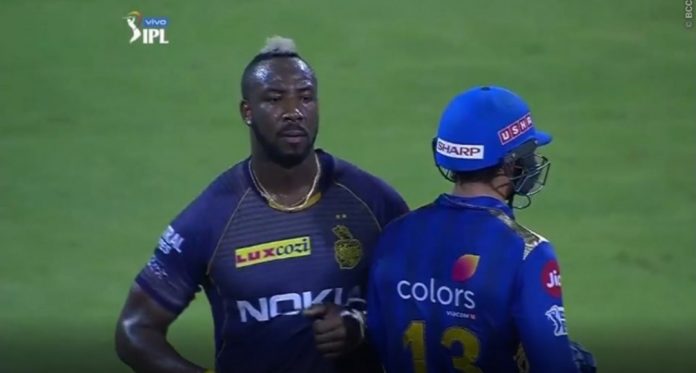 The destructive Kolkata Knight Rider’ all rounder Andre Russell bumps into Quinton De Kock after conceding 21 runs against him in First Over.

The six feet Caribbean monster known for his hard hitting abilities. He is the real match winner for the knight rider franchise in past two years. After Gauti’s  captaincy their team need a player to lead them to their destiny. Andre russel became the black magic for Dk and co. with his batting performance kkr have chased down many mammoth totals and the Caribbean is an integral part of their bowling attack.

But the Russell acts during the second match of IPL 2019 was raise a big question mark on spirit of the game.

Frustrated Russell bumps into Mumbai Indians wicket keeper batsman Quinton De Kock after conceding 24 runs in a over.This incident happend during the second league match between the Mumbai Indians and Kolkata Knight Riders at the Wankhede stadium in Mumbai.

Even though, Russell shows his aggression on the field De Kock has taken this incident in lite note.

“It was just a bit of fun out there. Think he was a bit angry as I took him on,” De Kock was quoted as saying to IPLT20.com after MI’s victory.

Video : Ashwin tried Mankand again But this time Dhawan trolled him Back