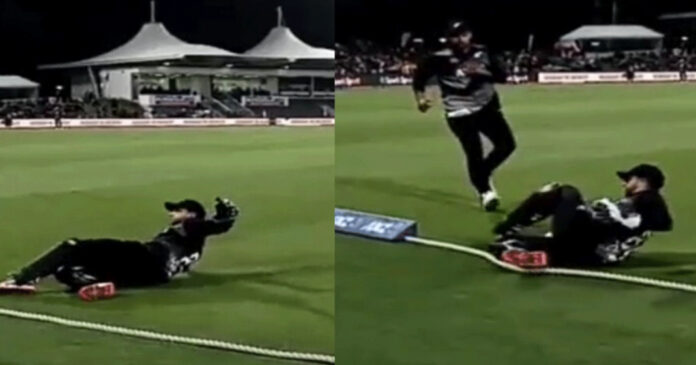 Pakistan registered a comprehensive victory over New Zealand in the ongoing Tri-series on October 8 (Saturday). Bowling first, Pakistan bowlers did well to restrict Black Caps for a total of just 147. Coming down to chase, captain Babar Azam and Shadab Khan stitched an important partnership in the middle.

While Babar remained unbeaten on 79 off just 53 balls, Shadab walked back to the pavilion after a well made 34 off 22 deliveries. Babar was adjudged the player of the match for his match-winning knock. However, it was Devon Conway’s incredible save that caught the headlines.

Cricketers usually play football during pre-match practice session to warm up their body and muscles. It seems like Conway has been playing a lot of football as he awoke the footballer inside him during his fielding efforts. The incident happened in the second innings when Shadab was facing Tim Southee. On a delivery, Shadab walked toward off-side and played a cheeky ramp shot to send the ball over Conway.

The ball was racing towards the boundary rope and it looked a certain boundary. But Conway had other plans as he dived in the last-minute and used to foot to stop the ball. Arguably, it is already one of the best fielding efforts the game has ever seen.

With this win, the Men in Green are topping the points table with two wins in two games. This will give a big boost to them ahead of the T20 World Cup 2022.

New Zealand, on the other hand, will next face Bangladesh on October 9. Kane Williamson’s side will want to overturn the situation and start building rhyme ahead of the marquee event, which is scheduled to get underway later this month.

Watch: Pakistan captain Babar Azam gives a death stare to a journalist after he said “Yeh sahi baat nahi” after he was ignored of...

Watch: Fan asked Ishan Kishan for a autograph on a phone that had MS Dhoni’s signature on it; Ishan gives a epic reply