Home Videos Watch: Fan asked Ishan Kishan for a autograph on a phone that... 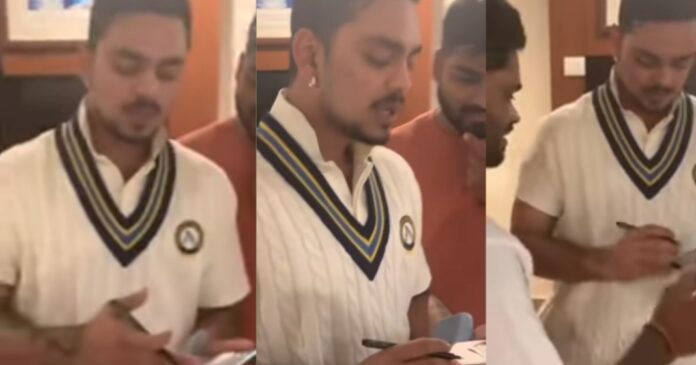 Indian cricket team’s left-hand opening batsman and youngster Ishan Kishan made all the headlines in the recently concluded 3rd One Day International (ODI) match against Bangladesh as the Indian batter went on to score a big double hundred in the match that setup India for a big win after losing the series already.

While Ishan is not part of the Test squad that is playing against Bangladesh, he returned to India to play for Jharkhand in the ongoing Ranji Trophy. He smashed a brilliant century in the 1st match itself, however the team still lost the match.

Meanwhile, a recent video involving Ishan Kishan is currently doing rounds on social media in which a fan asked Ishan to sign on his mobile phone. However, Ishan was left shocked as he saw that the fan had MS Dhoni’s autograph on it and the fans was asking for Ishan to sign above Dhoni’s signature.

The fan kept on insisting Ishan about signing on it, however, Ishan was no way happy about it, “It is Mahi bhai’s signature, how can I sign above that? We have not reached that stage.” In the end, Ishan decided to sign below MS Dhoni’s signature.

Meanwhile, Ishan Kishan was ruled out of India’s squad for the T20 World Cup 2022 despite playing him in the format in the build-up to the event. And now with the ICC Cricket World Cup 2023 to be played in November 2023, Ishan Kishan is certainly eyeing for a spot in the squad.

Watch: Pakistan captain Babar Azam gives a death stare to a journalist after he said “Yeh sahi baat nahi” after he was ignored of...