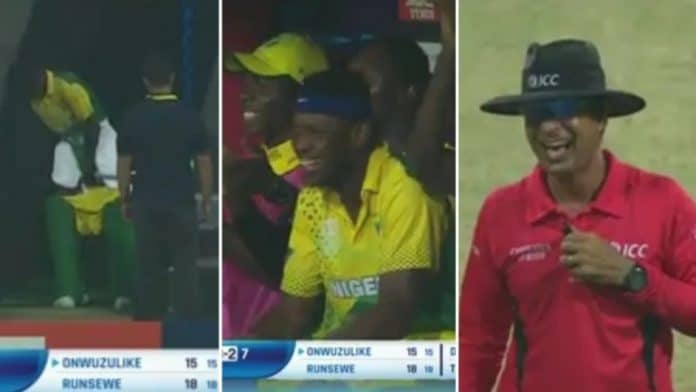 Nigerian Batsman leaves ground during the Match for Washroom.

The qualifiers for upcoming T20 world cup that is going to be held in Australia next year is in full swing. Underdog teams are trying their best to create history and make it to their ultimate dream.

Meanwhile, during the 18th match of the tournament that was scheduled between Nigeria and Canada, a very funny and bizarre incident happened.

The Nigerian team was chasing a target of 160 and had lost both of their openers within 2 overs. Sulaimon Runwese alone was fighting for the team along with his partner Chimezie Onwuzulike, and played steadily for few overs. All of a sudden, during the end of 7th over, Sulaimon was seen running towards the dressing room(Nature call at its best). After some initial wait, the next batsman was about to come to the crease but ultimately Sulaimon came to bat. Everyone in the crowd enjoyed this incident along with the Canadian team and umpires as well.