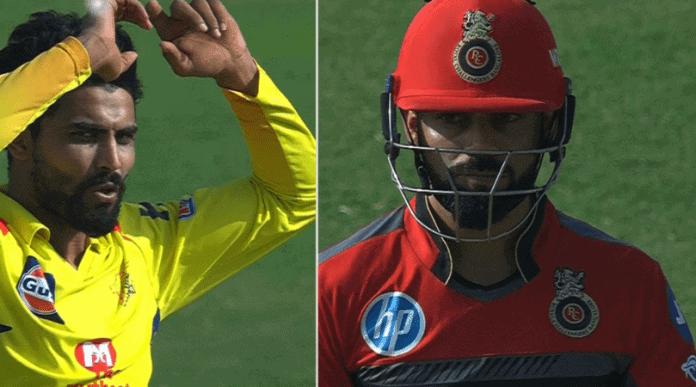 The rivalry between Chennai Super Kings and Royal Challengers Bangalore in Indian Premier League is one of the fiercest. Over the years, the fans have witnessed several nail biting encounters between the two teams where the team in yellow has emerged victorious on a majority of occasions.

Talking about the team’s matches during IPL 2018, MS Dhoni’s heroics had helped Chennai win a run fest at the M. Chinnaswamy Stadium as the Royal Challengers Bangalore lost the match despite scoring 205 runs in the first innings.

In the return match, Bangalore batted first once again in a day match at the MCA Stadium in Pune. Chennai struck early courtesy of Lungi Ngidi but Virat Kohli and Parthiv Patel steadied the boat with a 38-run stand for the second wicket.

Patel was dominating the Chennai bowlers while Kohli was making sure that Bangalore do not lose more wickets. However, when Ravindra Jadeja came in to bowl the 7th over of the match, he rattled the stumps of Virat Kohli.

Given how talented batsman Virat Kohli is, Jadeja should have gone mad after dismissing him in the innings but there was a strange look on his face post the dismissal. It seemed like even the Saurashtra-based all-rounder could not believe the fact that he got the better of the opposition team skipper.

Nevertheless, that wicket helped Chennai break Bangalore’s back as the Bold Army could only score 127 runs in the first innings. Parthiv went on to score a fifty whereas Tim Southee played a knock of 37 runs in the end. Jadeja picked up the wickets of Parthiv and Mandeep Singh to end his spell with figures of 3/18.

Chennai won that game quite comfortably with 2 overs to spare and Jadeja won the Man of the Match award for his 3-wicket haul. Here is the video of his strange celebration from that match.

Kevin Pietersen gets brutally roasted in IPL 2017 by MS Dhoni