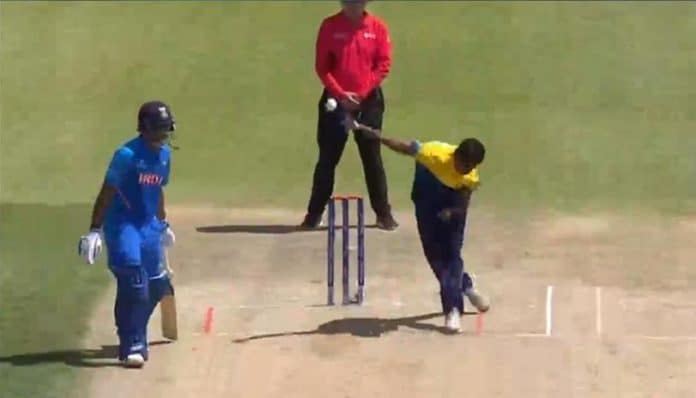 The ICC Under 19 World Cup 2020 is underway in South Africa right now. India is the defending champion of this tourney as Prithvi Shaw and Shubman Gill had inspired the young Indian side to the title in 2018.The Boys in Blue kicked off their title defence against Sri Lanka Under 19s yesterday and a bizarre moment in the match has got everyone scratching their heads. Priyam Garg is leading the Indian Under 19 side and his boys won the match by 90 runs after scoring 297 runs in the first innings.

During the first innings, Matheesha Pathirana from Sri Lanka who has an action resembling all time great Lasith Malinga. The two Indian openers, Yashasvi Jaiswal and Saxena expected the fast bowlers to bowl at an average pace. Since the boys are young the average speed of a fast bowler is between 130 and 140 only.

There are very few talents who can crack the 150 kmph mark barrier in Under 19 cricket. But, in the match played between the teams of India and Sri Lanka, Matheesha Pathirana clocked 175 kmph with his delivery on the speedometer.

This thing had taken everyone by shock as the fans have never witnessed a thing of such sort in the international cricket forget about the matches played at the Under 19 level. The experts were left speechless after the ball however, a majority of the fans believe that this was a technical glitch.

Earlier also, there was a technical glitch during one of matches featuring Australian fast bowler, Josh Hazlewood. The fast bowler had bowled a ball which was around 130-140 kmph speed but the speedometer showed it as 160 kmph. Later, it was learnt that the speedometer had calculated the speed of the bird flying above the pitch.

It seems like the same incident happened here. Watch Video of the ball here.