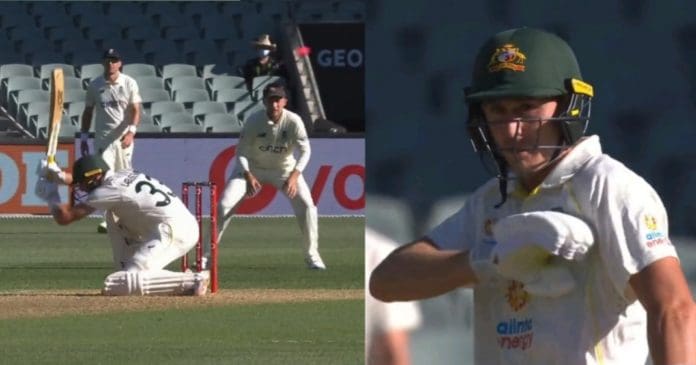 The Ashes 2021/22 series is currently underway in Australia. The home team won the first Test match in Brisbane comfortably by a margin of nine wickets. The second Test, which is a day/night encounter, is currently underway in Adelaide. The Aussies suffered a huge blow ahead of the match as their captain Pat Cummins was ruled out after coming in close contact with a COVID-19 positive person. Marnus Labuschagne performed well in the batting unit.

Vice-captain Steve Smith is leading Australia in the day/night Test against England. Smith won the toss and decided to bat first. The decision worked in Australia’s favor as they ended Day 1 at 221/2 after 89 overs. Although the home side lost the wicket of Marcus Harris early, the duo of David Warner and Marnus Labuschagne ensured that Australia are in a comfortable position at the time of stumps on Day 1.

Cricket Australia posted a video of Marnus Labuschagne leaving a ball from Ben Stokes and loudly saying ‘Well Played Marn’ after ducking. The video has gone viral on Twitter and has received close to 150,000 views. You can watch that video right here.

Day 2 of the day-night Test match will begin tomorrow at the Adelaide Oval. It will be interesting to see if Labuschagne can complete his ton.