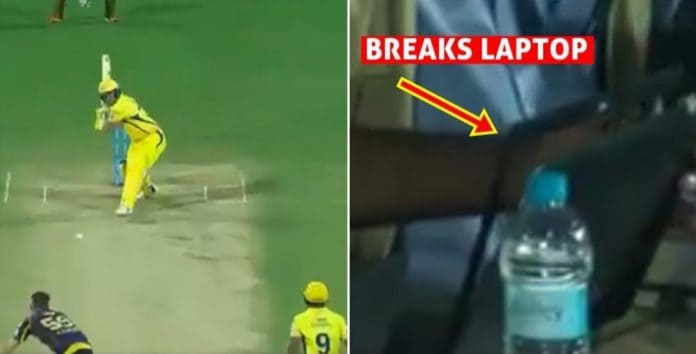 April 10 was a biggest day for Chennai Super Kings (CSK) as they played their 1st match at home after its comeback. A lot roaring moments happened right from the toss to Jadeja’s finishing six. Kolkata Knight Riders (KKR) were asked to bat 1st by captain Dhoni. The man for KKR was A Russell, scoring 88 off just 36 deliveries taking the target to 203 for the super kings.

The start that S Watson and A Rayudu gave was phenomenal. They added 75 of just 5.5 overs for the 1st wicket. Rayudu made 39 off 26 and Watson hit 42 from 19. Watson’s cameo included 3 fours and 3 big hits. One among the 3 sixes he hit was a highlight.

This happened during the last over of powerplay bowled by Tom Curran. Watson hit a straight six that landed on a laptop kept in the photographer’s table. The broken laptop was then shown on the bog screen.

It was in the same over that Watson got out. Then many responsible knocks led CSK to a 5 wicket win over KKR. Later Watson was given the purple cap for being the highest wicket in the tournament as of now.