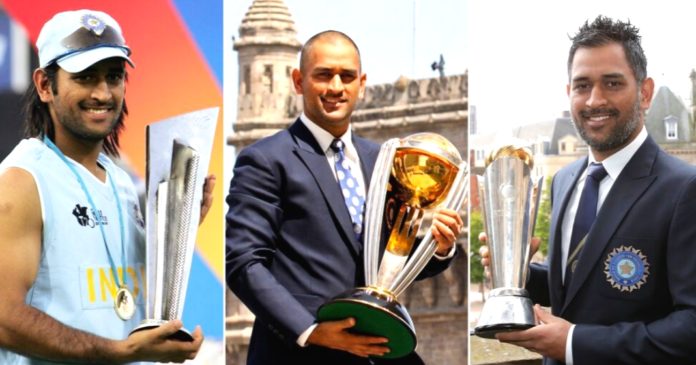 International Cricket Council (ICC) tournaments give new dimensions to the game of cricket. There is tremendous enthusiasm among the players as well as the spectators regarding these tournaments. ICC organizes these tournaments every two/four years.

It is a matter of pride for any team to win even one of these tournaments. India, Sri Lanka, West Indies and Pakistan are the four teams that have won all three tournament titles. Talking about the Indian team, there are few players in it who have tasted victory in all these three ICC tournaments.

Harbhajan Singh has been India’s premier spinner for over a decade. He was part of the team that won the T20 World Cup under the captaincy of MS Dhoni in 2007 and was also instrumental in winning the ICC World Cup in 2011.

Apart from this, he also participated in the ICC Champions Trophy played in 2002. India was joint winner in the Champions Trophy under the leadership of Sourav Ganguly. Harbhajan did well in that edition of the competition. He took 6 wickets in 5 matches in the tournament, with 3 for 27 in the first final being his best bowling figures.

Five years later, Harbhajan was instrumental in India’s first and only T20 World Cup win in South Africa under new captain MS Dhoni. In this World Cup, he took 7 wickets in 6 matches. Harbhajan was also a part of Team India in the 2011 World Cup hosted by India, in which, he took 9 wickets in 9 matches.

Virender Sehwag has also tasted success in all 3 ICC tournaments. Sehwag was the highest run scorer in the Champions Trophy 2002. He scored 271 runs in 5 matches while batting brilliantly throughout the tournament.

Five years later, he played a key role in India’s first-ever T20 World Cup win with a stellar performance with the bat. Although he could not play in the final due to injury, he always gave a good start to Team India till the semi-finals.

The Nawab of Najafgarh also played the role of an opener with Sachin Tendulkar in the 2011 World Cup and started most of the matches with a boundary off the first ball. In the very first match of this world against Bangladesh, Sehwag’s blistering innings of 175 runs in 140 balls was the highest individual innings of the tournament.

Yuvraj Singh has been one of the biggest match winning players of the Indian team. A terrific fielder along with his stellar performances with the bat and ball, all these attributes truly make him one of the best all-rounders in India.

Yuvraj has played an important role in making India victorious in all three ICC tournaments in his career. However, he did not get much chance to showcase his talent in the Champions Trophy played in 2002. Despite playing in all five matches, he only got a chance to bat in two. In the semi-final against South Africa, he scored an important 62 runs and also took a wicket.

Five years later, he was appointed vice-captain in the T20 World Cup played in South Africa. Yuvraj created history by hitting 6 sixes in an over off Stuart Broad in a ‘do or die’ match against England in the tournament and till date he is the only batsman in the world to achieve this feat in T20Is. Yuvraj scored 168 runs in 6 matches throughout the tournament and also took a wicket, due to which India won the first edition of the T20 World Cup.

After this, in 2011, Singh gave India a brilliant performance with both bat and ball. He played a very important role in making India the World champion after 28 years.

MS Dhoni is considered one of the greatest captains in the history of Indian cricket. He is the first and only captain under whose leadership India have won the title of all three ICC titles. In his very first World Cup as captain, Dhoni proved the trust shown in him with his intelligence and leadership skills. Team India won the T20 World Cup 2007 in a dramatic final over.

Four years after that, Dhoni also led the Indian team in the 2011 World Cup. The Indian had stellar performance throughout and in the final, it was MS Dhoni whose Six made India the World champion after 28 years.

Two years later, Dhoni led the Indian team to the ICC Champions Trophy in the absence of players like Sehwag, Gambhir, Zaheer and Harbhajan. In this tournament too, Dhoni showed his leadership ability in the final against England, handed the ball to the proving costly Ishant Sharma, who took two important wickets in the last over to turn the game around and India won the Champions Trophy.