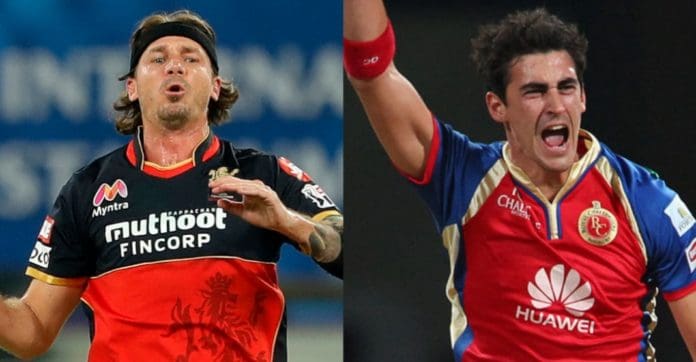 IPL 2022 promises to be a game-changing season in the tournament’s history. A mega-auction will precede the season. According to reports, each team will have permission to retain a maximum of four players only. On top of that, two new franchises will reportedly join the league next year.

The excitement for IPL 2022 is sky high. While some fans are concerned whether their favorite players would play or no in IPL 2022, the others are thinking about their favorite team’s retentions. Overseas players have been an integral part of the Indian Premier League. However, not every foreign star was available in the 2021 edition of the league. In this listicle today, we will look at five such overseas players whom fans want to see again in IPL 2022.

1. Mitchell Starc could be a blockbuster pick in IPL 2022 Auction

Australian speedster Mitchell Starc made a name for himself with his exceptional performances for Australia in the 2015 Cricket World Cup. The left-arm pace bowler was one of the main architects in Australia’s historic World Cup triumph on home soil.

However, Mitchell Starc has not played in the IPL since long. He played two seasons for the Royal Challengers Bangalore, and then, the Kolkata Knight Riders signed him at IPL 2018 Mega Auction. However, Starc did not play for KKR owing to injury. Now, fans are looking forward to see if Starc plays in 2022 season.

Another overseas fast bowler to appear on this list is Dale Steyn. The South African speedster decided to skip the 2021 edition of the IPL because of personal reasons. However, he made himself available for the Pakistan Super League and the Lanka Premier League.

Although Steyn has not been so successful in IPL of late, one should not forget he is one of the best bowlers on the planet. Perhaps, one of the ten teams could show interest in his services during the 2022 auction.

Mitchell McClenaghan is a name that became synonymous with the Mumbai Indians because of his excellent performances for the Mumbai-based franchise. McClenaghan played a pivotal role in MI’s success.

Unfortunately, the left-arm fast bowler from New Zealand went unsold at the IPL Auction 2021. McClenaghan is a player who brings a lot of passion to the field, and fans would love to see him again in IPL 2022.

4. A comeback on the cards for James Faulkner in IPL 2022

James Faulkner was once considered one of the biggest match-winners in the IPL. The Australian all-rounder changed the course of the match with his magnificent all-round performances for the Rajasthan Royals.

Surprisingly, Faulkner has been away from the league since the year 2017. He has not been a part of the last four IPL seasons from 2018 to 2021. It will be interesting to see if he gets a contract now because he has done well in the PSL.

A rather unpopular pick but Tom Banton never got a proper opportunity to showcase his talent in IPL 2020. He just got one chance to play for the Kolkata Knight Riders in the 2020 edition of the IPL.

After that, KKR released him and he opted out of the tournament. Banton is a destructive opener, who has performed exceptionally well in tournaments like T20 Blast, T10 League and PSL. Hence, many fans would want to see him again in the IPL.