Home Analysis 6 cricketers who won an ICC trophy in their final career game... 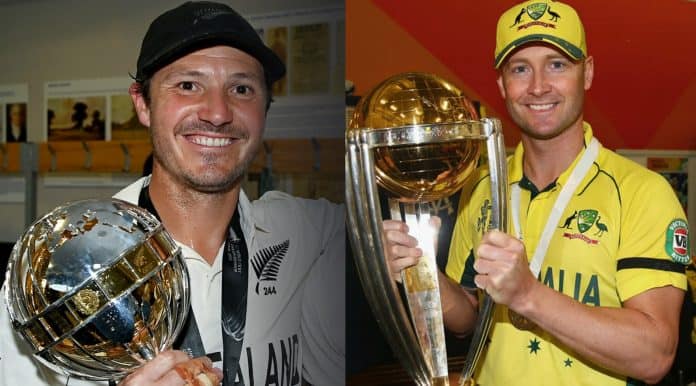 Winning an ICC tournament is a dream for any cricketer. Hence, it is of no surprise that a few cricketers plan their careers keeping the upcoming ICC events in mind. Let alone cricketers, even cricket boards plan the transition of their squad by having the next ICC event as the reference. In this article, we take a look at six cricketers who won an ICC trophy in the final game of their careers.

Bidding adieu on a high can be the best possible end to a player’s career. In cricket, nothing’s greater than winning an ICC winner’s medal before you retire. A few players have done just that in the history of the game. We look at these players in the below headings.

Six months after the historic World Cup final in 1992, Imran Khan decided that he would retire from the game. He was 40 years then and an end to his career by winning the World Cup was the best possible climax to the legendary span. The current Prime Minister of Pakistan was also the captain of the squad when Pakistan lifted the World Cup in 1992.

Glenn McGrath finished his ODI career after the 2007 World Cup. He won the trophy of that campaign and was also given the Player of the Series Award for his splendid performance throughout the competition. For a career that was at the centre of Australia’s stunning dominance for almost a decade, it was a fitting end after the pacer hung up his boots in ODI cricket after the final.

Michael Clarke was part of many match-winning encounters for Australia. After the legends of his country retired, it was Clarke who took over the reins as the captain of the squad. He led his country to its fifth World Cup win in 2015. However, although he still had a few years left in his game, Clarke announced his decision to retire from the ODI after the final.

One of the best wicket-keepers that New Zealand has seen, BJ Watling announced his retirement from the game after the conclusion of the World Test Championship final in 2021. A player who had a massive role to play in New Zealand’s rise as a dominant Test team, Watling had declared his decision even before the game. Although he was not great with the bat in the final encounter, he did a fantastic job with the gloves.

Brad Haddin was part of the Australian team as a reserve wicket-keeper when Adam Gilchrist was at his peak. However, after Gilly retired, Haddin took over the wicket-keeping duties for the Aussies. He was part of the 2015 World Cup that Australia won. Haddin was in the playing XI in that encounter in which the Aussies defeated the Kiwis. After the game, Haddin retired from the game.

One of the legendary Indian-origin cricketers of the West Indies team is Rohan Kanhai. He played a total of 79 Tests and was a dominant batsman of his era. However, the player could manage to be part of only 7 ODIs. Nevertheless, Rohan was one of the members of the West Indian XI that lifted the first World Cup in 1975. In fact, Rohan scored a fifty in the final game. He did not play an ODI after that encounter.

Playing XI When India Used DRS For The First Time