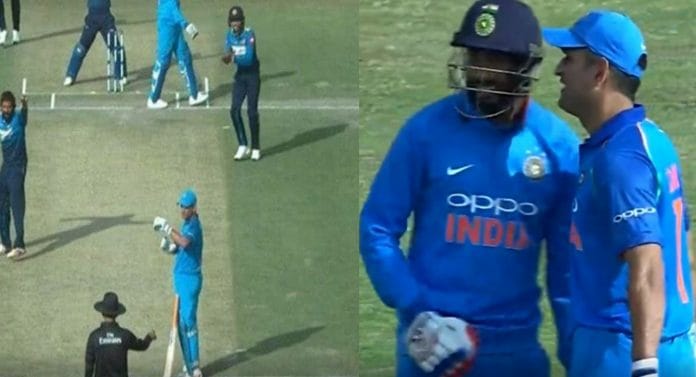 DRS enables the teams to review the on-field umpire’s decision if they feel the match official has committed a mistake in judgment. Recently, West Indies has nailed the art of DRS against England in the same way MS Dhoni has mastered this technique.

Although Dhoni was not a fan of this system earlier, Virat Kohli’s persistence has made it a regular part of India’s matches. Dhoni seems to have been done a lot of homework during the initial years as he is now the King of DRS. The following six instances support the claim, as mentioned above.

Yuvraj Singh was sweating to keep his spot in the Indian team during the year 2017. During an ODI match against England in Cuttack, the 2011 World Cup hero received a golden chance to save the day for the team.

Unfortunately, he nicked a ball, and the keeper caught it behind the stumps. Singh thought he had lost his wicket, but Dhoni saw that it bounced before the keeper collected it. He immediately asked for a review and saved Yuvraj. The all-rounder went on to score a century as India posted 381/6 on the board.

5.MS Dhoni asks for review even before umpire raises a finger!

During the first one-day of the series between Sri Lanka and India, the visitors destroyed the Indian batting lineup in Dharamsala. MS Dhoni fought like a one-person army with Jasprit Bumrah at the other end.

Bumrah misjudged a ball during the 33rd over bowled by Sachith Pathirana. The umpire adjudged him out LBW. Dhoni asked for a review knowing that the referee made an error, and the decision was overturned.

India vs. Pakistan is always considered as a high-profile clash because the cricket match attracts millions of viewers. Asia Cup 2018 was different as the team’s regular captain Virat Kohli opted to skip the event.

MS Dhoni was the senior member of the squad, and he brought his experience to the fore by taking a DRS to overturn Imam-ul-Haq’s wrong LBW decision. The batsman lost his wicket thanks to Dhoni’s brilliance.

3.Saving himself in an ODI match against England in 2018

Another instance from the year 2018 to feature on this list is from India and England’s bilateral ODI series. Although India failed to win the series, they gave the hosts a run for their money.

MS Dhoni came out to bat in the Leeds one-dayer. Adil Rashid sent Virat Kohli and Suresh Raina back to the pavilion during the same over. Soon, Moeen Ali trapped MS Dhoni in front of the stumps, but Dhoni felt that the umpire made a wrong call. He asked for a review, and the decision turned in his favor.

During the same ODI series, Eoin Morgan was in terrific touch. He looked to wreak havoc in the Pune ODI. Hardik Pandya managed to deceive him and get an edge off his bat during the one-day match.

However, the umpire did not declare him. MS Dhoni signaled Virat Kohli to take a review, and the decision came in India’s favor. The left-handed batsman from England had no choice but to return to the dressing room.

The first match of IPL 2019 will always stay close to CSK fans’ hearts because the Yellow Army had defeated their rivals Royal Challengers Bangalore in a lopsided opening match. RCB’s batsmen struggled to play well at Chepauk.

They were 53/6 when Imran Tahir got an edge from Navdeep Saini’s bat. The ball went straight into the hands of Shane Watson, but the umpire rejected the appeal. At the very last moment, Dhoni asked for a review and sent Saini back to the pavilion.