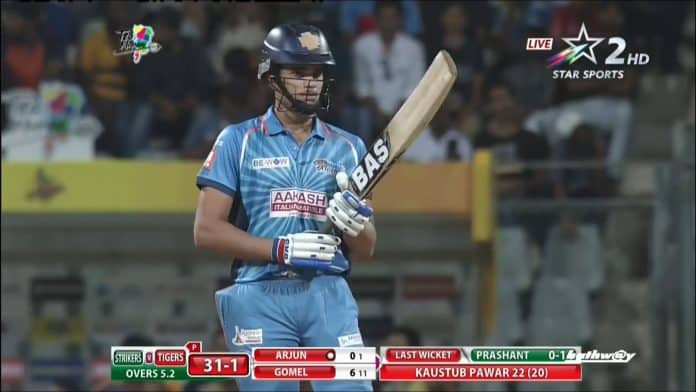 Arjun Tendulkar bagged his maiden IPL contract from the Mumbai Indians at the recently-concluded auction. Being the son of Sachin Tendulkar, Arjun will be under immense pressure of performing well in his debut season.

Given that the Mumbai Indians have unearthed many talents over the last 13 years, it should not be a surprise if Arjun Tendulkar emerges as a match-winner for the franchise. The Mumbai-based bowler has specialized in left-arm pace. Besides, he can also bat and hit a few big shots in the final overs.

Arjun Tendulkar opened the innings for the DY Patil B team after his got an opportunity to bat first in the high-stakes match-up. DY Patil B won the match, and Arjun’s knock at the top played a vital role in his team’s victory.

Opening the innings for his team, Arjun Tendulkar scored 35 runs off 28 deliveries. He played some really good shots during his 28-ball knock. His excellent start helped the DY Patil B team finish with 170/8 in their 20 overs.

You can watch the full innings of Arjun Tendulkar right here.

Aman, who is known for his hard-hitting power, also played well for the DY Patil B team. He smashed 47 runs from just 26 balls. In reply, CAG managed 158 runs and lost the match by 12 runs. CAG got off to a terrible start in the second innings as they lost five wickets before touching the 60-runs mark. Ankit Kaushik ensured his team reaches closer to the target, but his 77 runs went in vain as DY Patil B won the contest. Although DY Patil B made it to the semifinals, DY Patil A ended their campaign in the final four.