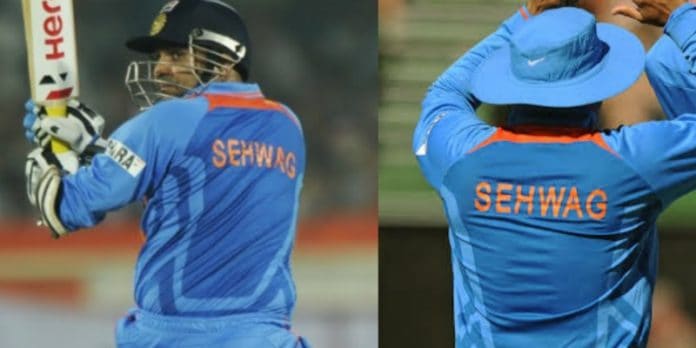 Virender Sehwag is not just one of the most destructive openers in Indian cricket but also in world cricket. The man from Delhi entertained many with his performances on the field. He is still entertaining us, albeit as a commentator and as a Twitter user. Recently, he revealed the funny reason behind Virender Sehwag wearing a numberless jersey in the final years of his career.

A swashbuckling opener for India

Virender Sehwag revolutionized the art of batting in India. Unlike most of the other openers, Sehwag was aggressive in his approach and hence, never allowed the bowlers to settle. Across formats, he maintained the same mindset and this helped him break numerous records.

He played in 104 Tests, 251 ODIs and 19 T20Is for India and was part of the World Cup-winning teams in 2007 (T20) and 2011 (50-over). Viru himself broke a few records, including scoring a double century in ODIs and also becoming the first Indian to hit a triple-century in Tests. In IPL, as well, representing teams such as Delhi and Punjab, the opener had many memorable outings.

The hilarious reason behind Virender Sehwag wearing a numberless jersey

In a special series called, “Viru ki Baithak”, a fan asked the opener the reason behind why he wore a jersey without a number in ODI cricket on numerous occasions. Explaining it, he said that he initially started wearing jersey No. 44, which was considered unlucky by both his mother and his wife. Then, his mother suggested that he wear No.66 while his wife asked him to don No.2 on the back. To avoid any kind of altercation between them, Sehwag altogether ditched the number behind his ODI jersey.

Just like this, Viru often has hilarious incidents to narrate, which is keeping the fans entertained. When he is commentating, as well, the former cricketer maintains a light atmosphere.

Explained: What Is The Meaning Of A Jaffa Ball In Cricket?