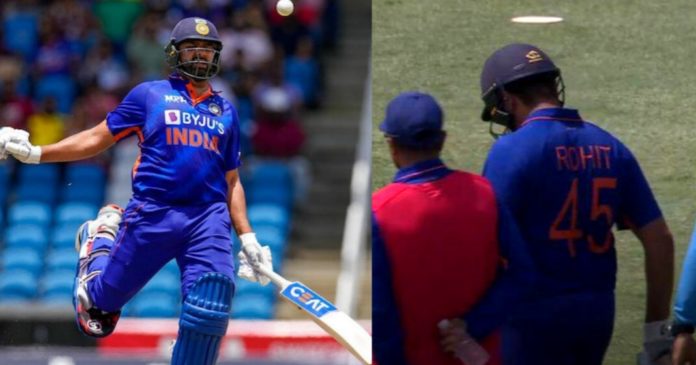 Former Pakistan leg-spinner Danish Kaneria has expressed his concern about the injury to Indian captain Rohit Sharma. Let us tell you, in the second innings of the third T20 match played against the West Indies, Rohit Sharma had to go back after being retired hurt due to a spasm in the back muscles while playing. At that time he was playing at 11 runs not out in 5 balls. He hit a four and a six in his inning.

In the second over of the inning, Rohit played a pull shot off the first ball of Alzarri Joseph and hit a fine six. After this, after playing a dot ball, he hit a four on the third ball. The Indian captain looked to be in very good form but after the fourth ball, he was seen in a lot of trouble. The physio immediately reached the ground to see Rohit, but he did not appear to be in a position to play further and had to leave the field.

Sharing a video on his YouTube channel, Danish Kaneria explained why Rohit Sharma needs to get back to his full fitness at the earliest. He said, “As soon as Rohit Sharma hit the pull shot and sent the ball towards the boundary, that pain could be clearly seen in his face. I know as a player that he was in a lot of pain.”

“The most important thing at this time is that he should keep his fitness in mind, even if it requires him to rest in two matches. The Indian team desperately needs Rohit Sharma in both the Asia Cup and the T20 World Cup. So even if he rests, the team has many match-winners and captaincy options like Shreyas Iyer, Sanju Samson or Rishabh Pant,” he further added.

After Rohit Sharma left the field, Suryakumar Yadav took one end and scored quick run. In the match, he played a brilliant inning and scored half-century, 76 runs in 44 balls and led the team to victory by 7 wickets.

Danish Kaneria said about Suryakumar Yadav’s batting that, everyone knows what an amazing player Suryakumar Yadav is and that according to him, there is no one who can can play a better flick shot than him in the current cricket. He also added that there is no answer to the way he uses his wrists and flicks the ball towards the boundary.