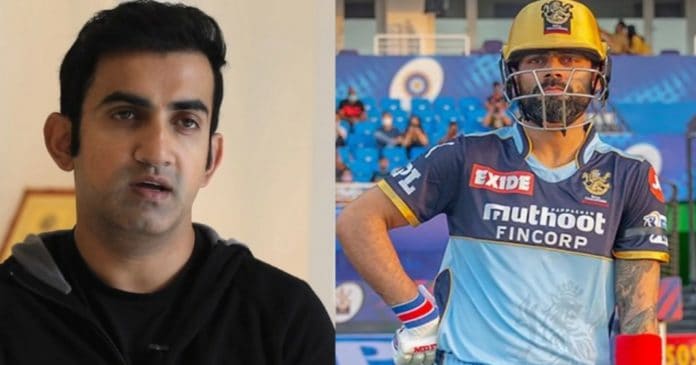 Former Indian batter Gautam Gambhir has selected the three cricketers that the Royal Challengers Bangalore team should retain for the 2022 edition of the Indian Premier League. The Bangalore-based franchise played its last season under Virat Kohli’s leadership this year. Unfortunately, they could not end their title drought this season as well. The Virat Kohli-led outfit finished third in the league stage and then lost to the Kolkata Knight Riders in the Eliminator match.

After the Royal Challengers Bangalore got eliminated, Gautam Gambhir discussed the possible retentions for the team ahead of the upcoming mega auction. Gambhir started the list with the captain of Royal Challengers Bangalore, Virat Kohli. The right-handed batter is the most successful batter in the Indian Premier League history. He has been a part of the Bangalore-based franchise since day 1 and played in all seasons for them.

The second name to appear on Gautam Gambhir’s list was Australian all-rounder Glenn Maxwell. The right-handed batter was the only one to score more than 500 runs for the Royal Challengers Bangalore in IPL 2021. Maxwell played in all 15 games of IPL 2021 for RCB, scoring 513 runs and taking three wickets.

The last player was Yuzvendra Chahal. The leg-spinner has been the highest wicket-taker for the Royal Challengers Bangalore in IPL history. He is one of the few bowlers who has performed well even on the batting paradise at the M. Chinnaswamy Stadium.

Interestingly, Gambhir did not select AB de Villiers or Devdutt Padikkal in the list. Padikkal has been a consistent performer for RCB in the recent seasons, while de Villiers has been a match-winner for the franchise for close to ten years.