Home Videos “I will not leave you”- Shikhar Dhawan’s father beats the cricketer after... 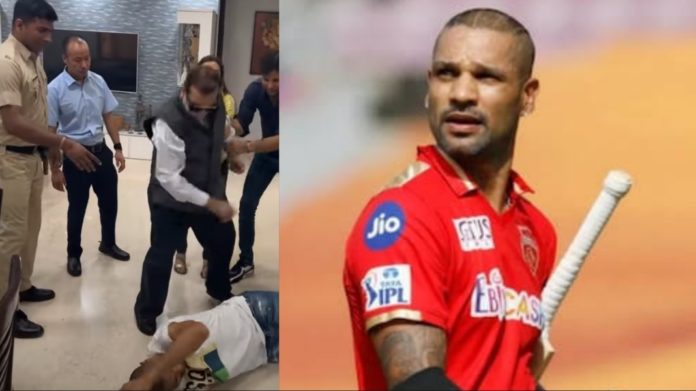 Shikhar Dhawan recently shared a hilarious Instagram reel on social media, where his father Mohinder Paul Dhawan can be seen hilariously beating him for not taking the Punjab Kings to the IPL 2022 Playoffs. The final round of the 2022 edition of the Indian Premier League is underway right now, where Gujarat Titans, Rajasthan Royals, Lucknow Super Giants and Royal Challengers Bangalore are competing for the championship.

There were 10 teams in the tournament at the start, and the six teams that were eliminated from the league stage were Chennai Super Kings, Mumbai Indians, Kolkata Knight Riders, Punjab Kings, Delhi Capitals and SunRisers Hyderabad. Star Indian opener Shikhar Dhawan was a part of the Punjab Kings team.

While the Mohali-based franchise did well in the tournament, they failed to finish in the Top 4. They missed out on a spot in the playoffs by just two points. Shikhar Dhawan was one of the top performers for the Punjab Kings, but since his team did not qualify for the playoffs, he received a beating from his father Mohinder Paul Dhawan.

The cricketer himself shared the video on Instagram and captioned it as follows: “Knock out by my dad for not qualifying for knock outs.” Gaurav Kapoor commented: “Hahahahahaha full performer family.” Even Dhawan’s PBKS teammate Harpreet Brar had a laugh in the comments box. The background music is of a Hindi dialogue, where the actor says: “I will not leave you today.” You can watch the video here:

The reel has gone viral on social media, fetching more than 100,000 likes inside one hour. Fans have loved the total family entertainer from Dhawan family. As far as IPL 2022 is concerned, the Eliminator match of the tournament will get underway soon in Kolkata, where the Lucknow Super Giants will take on three-time runners-up Royal Challengers Bangalore.