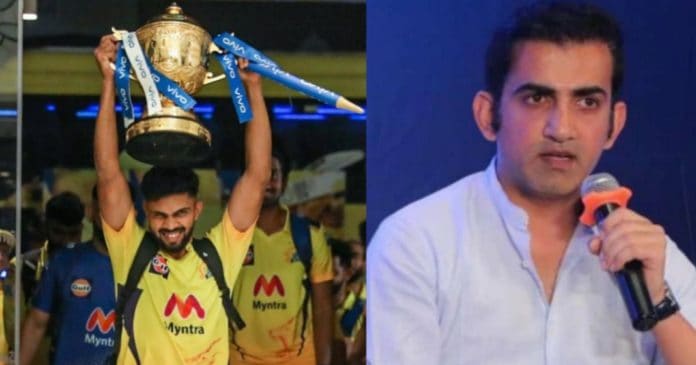 Former Kolkata Knight Riders captain Gautam Gambhir recently picked the three players that the reigning champions of the Indian Premier League, Chennai Super Kings should retain for the next season. The retention policy has not been officially announced by the BCCI as of now, but as per reports, teams will be allowed to retain only two-three players. Some reports have even claimed that a team can make four retentions.

Gautam Gambhir predicted the three players that the Chennai Super Kings would wish to retain prior to the 2022 edition of the Indian Premier League. Interestingly, the southpaw did not pick the captain Mahendra Singh Dhoni. Also, he ignored the veteran all-rounder Suresh Raina. Gambhir said it all depended on what role Dhoni would play.

“It depends on MS Dhoni, what kind of role he has to play, or will he even play, but if I will have to retain three players, it would be Ruturaj Gaikwad, Ravindra Jadeja and perhaps Faf du Plessis,” Gambhir said during his appearance on ESPNCricinfo.

One of the main reasons why fans and cricket experts want the Chennai Super Kings to retain Ruturaj Gaikwad for IPL 2022 is because he won the IPL 2021 Orange Cap, with 635 runs. Even Faf du Plessis scored 600+ runs, while Ravindra Jadeja finished second on the Most Valuable Player leaderboard. Thus, Gambhir expects this trio to be retained.