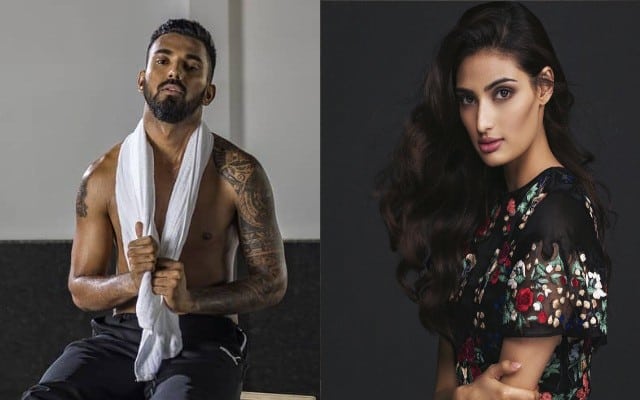 In country like India where the sport of cricket is worshipphed  ,cricketers are treated as celebrities and there is often a buzz that Indian cricket could be seen linking up with the Bollywood diva or supermodel. There are many cricketers in the town who have headed out for a love marriage with the Bollywood actress or top model.  It’s pretty common to witness any news or headlines straight forwardly that a cricketer is dating a Bollywood actress. We have a long list of Cricketers who have earlier dated the Bollywood actress for a long time and got married. Virat Anushka, couple pops the first then we have Zaheer Khan and Sagrika Gate, Harbhajan Singh and Geeta Basra, YuvrajSingh and Hazel Keech. It may be common for a cricketer to find love in the Bollywood Actress.Now here has turned up the name of another young cricketer who is dating this beautiful BollyWood actress who is a daughter of a prominent actor.

KL Rahul is one of the best good looking, handsome cricketers. He has an immense fan following on the social media accounts with his more than 50 fanpages.He has been a part of all the formats of the cricket and has been consistent in his performance.Recently ,he secured his century while Playing in the World Cup 2019 against India  .He is not only known for his performances but also he is a very stylish player who holds various brand endorsements.

Now there is a new angle added to his love life. Buzz is that this prominent cricketer is dating Athiya Shetty who is daughter of well known actor Sunilshetty. Athiya has appeared in various BollyWood films, made her debut opposite Suraj Pancholi in Hero and she got attention after his dance number in Nawabzaade with Bad shah and the cast. The song was a big heat.

The two are dating each other and look who gave the confirmation. Recently Athiya Shetty shared a quote on Instagram, “Trust the timing of your life.” To which, Vikram Phadnis quickly comment on this quote, “You seem to be v hyper and excited these days??? Let’s go to KL??? ….. Kuala Lumpur???? After this comment, Athiya Shetty came with a comment and wrote, “Time to block you.”.After which Vikram replied that “I will complain to the umpire, once your wicket is gone” . 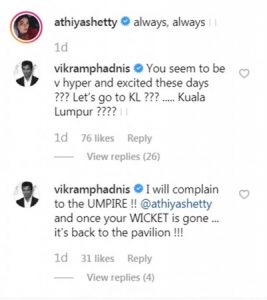 This might be a super confirmation for the fans that the Duo is dating.

Earlier Rahul’s name was been linked with the South In ah Ian actress Nidhi Agarwal ,who appeared in Bollywood movie ‘Munna Michal ‘opposite Tiger Shroff, but the two denied that they are in relationship and dismissed the rumour.