Home News “Looking for a draw on the first day”- Waqar Younis lashes out... 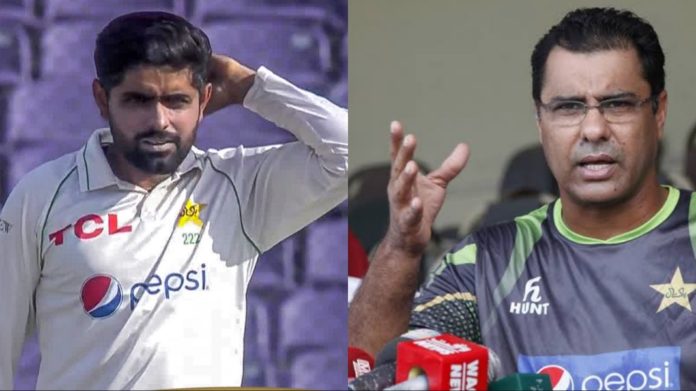 The second match of the ICC World Test Championship series between the Australian cricket team and the Pakistan cricket team is currently happening at the National Stadium in Karachi. Australia won the toss and chose to bat first. The first Test ended in a draw. So the winner of this match will gain an unassailable 1-0 lead in the 3-match series.

The pitch for the first Test was friendly to batters. The pitch in Karachi is a little better for bowlers, but Pakistan have allowed Australia to post a huge total with their defensive tactics. Former Pakistan bowler Waqar Younis expressed his disappointment over Babar Azam’s tactics.

Younis opined that the home team was aiming to secure a draw in this match from the opening day itself. Here’s what he said on commentary:

“The tactics I’m seeing at the moment is like we’re looking for a draw on the first day. It’s ridiculous.”

Former England batter Rob Key agreed with him as he labeled the action on Day 1 as an “incredibly negative passage of play.” Even sports anchor Sawera Pasha commented that the tactics shown by Babar Azam’s men were ‘mysterious’.

As mentioned ahead, the visitors called the toss right and decided to have a bat first. Opening batter Usman Khawaja scored a ton for the Australian team. Although Marnus Labuschagne scored a duck, the Australian team ended the day with only three wickets down.

At the moment, they are 443/7 with 163 overs done. It will be interesting to see if they manage to touch the 500-run mark. Wicket-keeper Alex Carey has completed his half-century. Mitchell Starc is batting with him in the middle, and the Aussies still have the wickets of captain Pat Cummins and debutant Mitchell Swepson in hand.