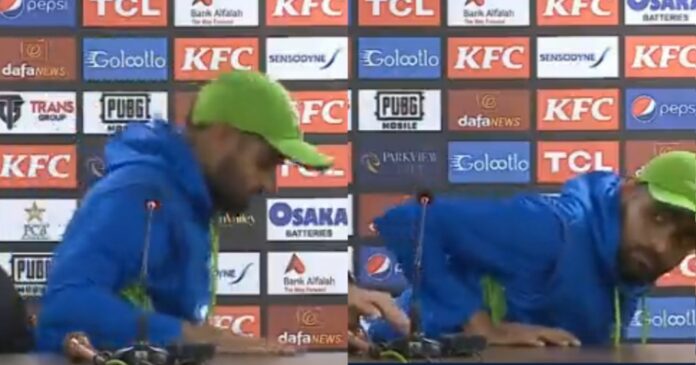 Pakistan captain Babar Azam was not amused by the attitude of a journalist during the press conference after the first Test against New Zealand in Karachi. He was answering questions during the press conference, in such a situation, a journalist did not get a chance to ask questions. He later tried to vent his anger on Babar. Let us tell you that the first Test match between the two teams ended in a draw.

The last day of the game did not go according to plan for either team. Pakistan declared their second innings on the last day of the Test match with a lead of only 137 runs. It was a shocking decision as New Zealand started their second innings aggressively. But the match was called off early due to bad light. By the end of the game, the visiting team had scored 61 runs for the loss of one wicket in 7.3 overs.

Meanwhile, during the press conference held after the match, Babar Azam was continuously giving answer to questions from the journalists. After the end of the conference, as soon as Babar Azam was about to come out, a journalist said to him, “Babar, this is not the way. Here we are prompting you to ask questions.”

After this Babar Azam stared at that journalist. From the look of the captain, it seemed that he was angry and not happy with such attitude of the journalist. Watch the video below.

While talking about the Test match, the match between Pakistan and New Zealand ended jn a draw. Pakistan declared on 438 in the first innings and 311 for 8 in the second innings. New Zealand declared their first innings by scoring 612 runs for 9 wickets. In this way, Pakistan set a target of 138 runs to win for the guests.

New Zealand were 61 for 1 chasing the target in the second innings, but play was called off early due to bad light. The second Test match between Pakistan and New Zealand will be played at the National Stadium Karachi from January 2.

Watch: Fan asked Ishan Kishan for a autograph on a phone that had MS Dhoni’s signature on it; Ishan gives a epic reply