Home News “We proved all doubters wrong”- Dwayne Bravo explains why IPL 2021 was... 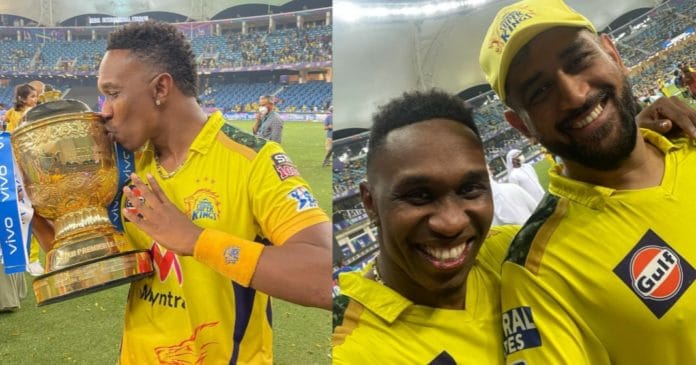 Former West Indies cricketer Dwayne Bravo was a part of the Chennai Super Kings squad that won the IPL 2021 trophy. The Caribbean all-rounder has been an integral part of the CSK squad since 2011. The Super Kings signed him at base price in the mega auction and since then he became a match-winner for the team.

While Bravo has achieved a lot of success in the yellow jersey, he has also suffered many injuries which have forced him to miss matches. In IPL 2020, when the Chennai Super Kings needed his experience, he picked up an injury and could not perform his best. Soon, he was ruled out of the tournament.

Almost every cricket fan doubted the Chennai Super Kings’ chances in 2021 because they had a squad featuring many cricketers who were close to retirement. However, MS Dhoni and Co. proved the doubters wrong and ended IPL 2021 as the champions. Bravo recently stated in an interview that the IPL 2021 triumph was special for the Chennai-based franchise because they proved all doubters wrong.

“It was a special season because the season before, we came seventh and it was the first time CSK did not qualify (for playoffs) in the history of IPL. So, all of us as players were determined to come back and prove ourselves and the fans that we are much better than that last season,” Dwayne Bravo was quoted as saying by Telangana Today.

CSK have not retained Dwayne Bravo for the IPL 2022 season

The Chennai Super Kings were compelled to retain only four players from their IPL 2021 squad ahead of the IPL 2022 Mega Auction. The Super Kings retained the quartet of MS Dhoni, Ravindra Jadeja, Ruturaj Gaikwad and Moeen Ali. They surprisingly let go of Dwayne Bravo who has been an important part of the squad for years.