Home News “He had a massive impact on my career” – Harshal Patel disclose... 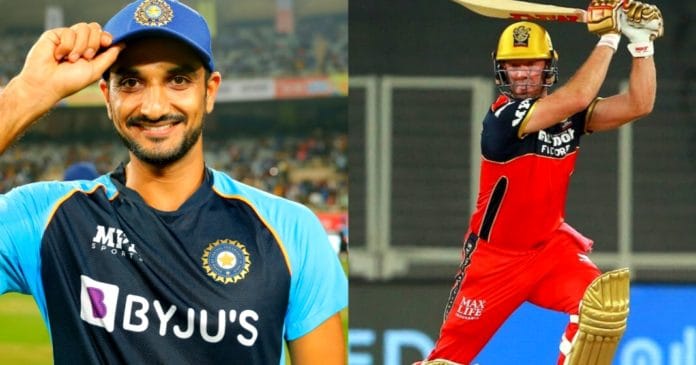 Indian cricket team’s hero from the 2nd T20 International match against New Zealand, Harshal Patel has reveal the career-changing advice that he received from AB de Villiers while at Royal Challengers Bangalore (RCB) in IPL.

The Indian cricket team recorded a huge win over the New Zealand team to win the 3 match series with 1 match still to go. India won the 1st match earlier in Jaipur and now won the second match by 7 wickets and little less than 3 over still remained to be played.

And it was the debutant Harshal Patel who impressed the Indian cricket team fans. Patel took 2 wickets and gave away just 25 runs of his 4 overs, in a pitch which was nightmare for the bowlers. He was awarded the man of the match following his performance.

However, later, during a press conference, Harshal Patel revealed that he received a career changing advice from RCB teammate AB de Villiers.

AB de Villiers has announced his retirement from all forms of cricket, including the IPL, yesterday. He has scored over 20 thousand runs including the Test, ODI, T20I and the IPL.

“Ab De Villiers had a massive impact on my career. I have always been a silent observer of him. He said when a batsman hits your good delivery, you shouldn’t change that. You should Consistently force Batsman to hit your good Deliveries only.” – Harshal Patel (In press)

And that really had a massive impact on Harshal Patel’s career as the 30-year-old Gujarat born bowler went on to win the Purple Cap in the IPL 2021. He picked up 32 wickets from 15 matches, however, Royal Challengers Bangalore got knocked out of the IPL 2021 in the Eliminator in the hands of Kolkata Knight Riders (KKR).

Talking about India vs New Zealand 2nd T20I, New Zealand posted 153 runs on the board with a quickfire start from Martin Guptill. Harshal Patel was the pick of the bowler with 2 wickets.

For India, KL Rahul and Rohit Sharma both scored 50 plus runs and before KL Rahul got out for 65 runs in the 14th over with India on 117 runs. Rohit Sharma too departed few overs later for 55 runs. Suryakumar couldn’t contribute much, but it was Venkatesh Iyer and Rishabh Pant who got India over the line with 7 wickets still in hand to win the 3 match T20I series with one match still to go.