Home News “I don’t see any player would say no” – Jasprit Bumrah speaks... 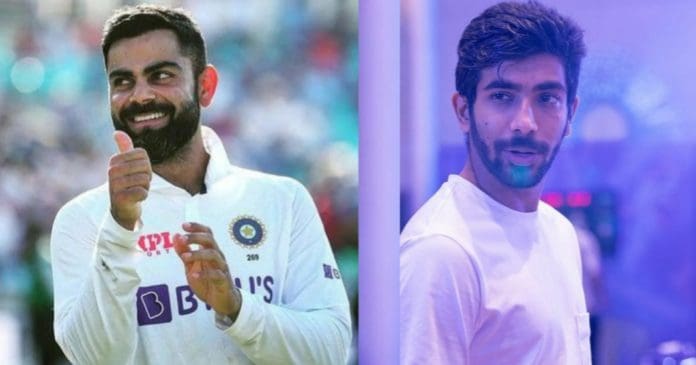 With Virat Kohli now out of the helm of the Indian cricket team’s Test captaincy, the biggest question now is who will be India’s next Test captain. Jasprit Bumrah says he is ready.

The Indian top batsman Virat Kohli decided to quit India’s Test captaipcy after suffering a series defeat against South Africa, but it not clear whether he has done so as because of that, or something else.

Virat Kohli is India’s one of the best captain ever. He took the mantle from legend MS Dhoni and carried it forward with all pride. He took India from 7th place in the ICC Test Ranking to the top of the podium in the ranking.

But now that he has decided it, the question is, who will be India’s next Test captain. Many names are coming out with Rohit Sharma and KL Rahul being favourites.

Jasprit Bumrah says he is ready if given opportunity

Now, pace bowler Jasprit Bumrah has opened up that, if given an opportunity, will be ready to lead the team in Tests.

Jasprit Bumrah was present for the press conference ahead of the ODI series against South Africa, where he was asked if he would be interesting in taking that role.

In response to which, he replied that it would be an honour for him if even the opportunity and believes that no players would say no that and he is no different to that.

Jasprit Bumrah as India's next Test captain anyone? pic.twitter.com/Gur6rKYMmw

He further continued that whichever leadership group is part of, he is ready to contribute however he can to the best of hai ability.

He said it is as same as taking the responsibility, talking to players and helping them out, which has been always his role in the team and will continue doing so.

As of now, there has been no decision made on it yet, and BCCI believes that there is enough time to think about it first.

The Indian team next plays a Test series against Sri Lanka at home, beginning from the February the 25th. Rohit Sharma and KL Rahul are said to be the front-runners for the role, but many are even suggesting Rishabh Pant‘s name for it.

What will be the final, only the BCCI and the selectors panel knows. What’s next for India and the players, is the upcoming ODI series against South Africa beginning from the 19th of January.