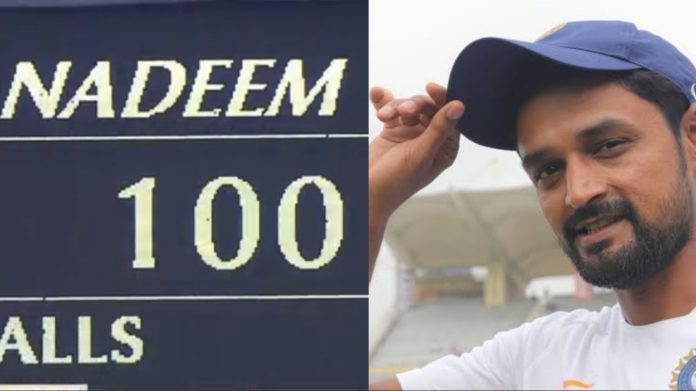 Shahbaz Nadeem is primarily famous for his left-arm spin bowling. But in the ongoing Ranji Trophy pre-quarterfinal match against Nagaland, the veteran player scored 177 runs for his team with the willow. Nadeem’s excellent knock guided Jharkhand to an enormous 880-run total in the first innings.

The knockout stage of the 2022 Ranji Trophy is currently underway. The first-innings lead is decisive in knockout matches. Thus, Jharkhand decided against declaring the innings and scored as many runs as possible in the first innings.

Saurabh Tiwary is the captain of the Jharkhand team. Nazim Siddiqui opened the innings with Utkarsh Singh. Both batters returned to the pavilion when the score was 64. Contributions from Kumar Suraj and captain Tiwary took the team total closer to 200. Virat Singh then scored a century, whereas wicket-keeper batter Kumar Kushagra aggregated 266 runs off 269 deliveries.

Singh and Kumar demolished the Nagaland bowling attack with their stellar performances. The score crossed 350, and then Anukul Roy chipped in with a fifty as well. To make things more miserable for Nagaland, Shahbaz Nadeem played a 177-run knock as Jharkhand passed the 700-run mark.

Jharkhand continue to make merry with the bat against Nagaland. 👍 👍

In an unbelievable partnership, the duo of Nadeem and number 11 batter Rahul Shukla added 191 runs for the last wicket. The score was 689/9 when number 10 batter Ashish Kumar lost his wicket. Nadeem and Shukla showed no relent to the Nagaland bowlers.

While Nadeem hit 22 fours and two sixes in his 304-ball 177, Shukla smacked seven fours and six sixes in his unbeaten 85-run innings. Eventually, Jharkhand were all out for 880 runs after 203.4 overs.