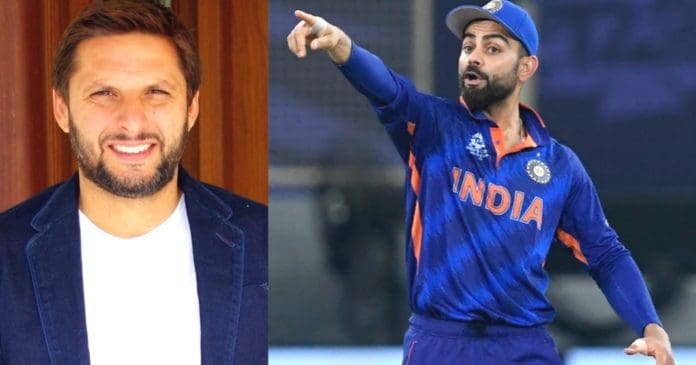 For Pakistan cricket team all-rounder and captain Shahid Afridi has spoken on Virat Kohli stepoing down as India’s T20 captain, but the Pakistani leg-spinner recommends that Virat Kohli should step down as India’s captain in all format to concentrate more on his batting.

Following that, vice-captain Rohit Sharma has been promoted to captain the Indian team in T20 format. KL Rahul has been appointed the new vice-captain for India in the shortest format of the game.

Speaking to a Pakistani channel, former Pakistani all-rounder, who is quite famously known as ‘Boom Boom Afridi’, commented on Virat Kohli stepping down as India’s T20 captain.

He stated that Kohli has been an incredible force for Team India and it would be the best for him to retire as captain of India to focus more on his batting.

Former #Pakistan skipper Shahid Afridi feels #India captain #ViratKohli should step down from the leadership role in all formats of the game to flourish as a batsman for his country. @SAfridiOfficial#ShahidAfridi #Cricket

He also praised Rohit Sharma, he stated that he played with Rohit Sharma for a year and he knows that Rohit is top player and a good leader.

It is to be noted that both Rohit Sharma and Shahid Afridi were teammate in the inaugural season of the Indian Premier League (IPL) in 2008 playing for the Deccan Chargers, when the Pakistani players were allowed to play in the IPL.

Further commenting on Kohli’s decision, he stated that he knew that one day it will happen, and recommended that it is for the benefit of Kohli himself that he step down as India’s captain from all formats.

Virat Kohli, who was captaining the Indian team in the all forms of cricket and also captaining the Royal Challengers Bangalore in IPL, stepped down as India’s T20 captain as well Bangalore’s captain in the IPL.