Home News “He was forced to do so” – Shoaib Akhtar makes shocking claim... 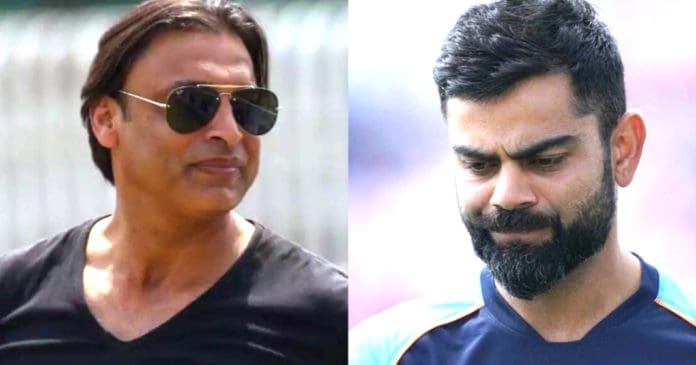 Former Pakistan cricketer and pace bowler Shoaib Akhtar has made a bold claim regarding Virat Kohli and him quitting India’s captaincy.

As of now, all should be aware that prolific Indian batsman Virat Kohli has stepped down as India’s captain in all formats of the game.

As a result of which, since the selectors didn’t wanted split captaincy in the limited overs format, he was sacked from his position as India’s ODI captain, even though he wanted to remain in that position. Rohit Sharma was named his replacement in all of the formats.

What did Shoaib Akhtar said ?

Commenting on the same, former Pakistan cricketer and pace bowler Shoaib Akhtar, while speaking to ANI, stated that Virat Kohli was forced to leave India’s captaincy.

He stated that Kohli was forced to leave India’s captaincy and added that this is not the best of time for Kohli and he should focus to prove himself.

#WATCH | Virat Kohli did not relinquish the captaincy himself. He was forced to do so… He is a great cricketer. I think he is going to come out of this: Former Pakistan fast bowler Shoaib Akhtar in Muscat, Oman pic.twitter.com/jbXU5My2bj

He also gave him an advice, he said that Kohli should not try too many things and should go out there and play with his natural game.

He also added why Virat is struggling with his form. He said that Virat likes to play with his bottom hand, and when someone is out of form, those play with bottom hand, tends to struggle more, but believes that he will come out of all this and should keep on moving forward.

Not been the best of times for Virat Kohli

Not only these last couple of months, but also for the last 1 or 2 years, Virat Kohli has not been at his best, and the fans deeply missing him. He is players who likes to score centuries, but the last century that he scored was way back in 2019 against Bangladesh in the Day/Night Test match in Kolkata.

India will next take on Sri Lanka from the 25th February in their next Test series. BCCI and the selectors are yet to name a replacement captain for Virat Kohli in Test cricket, but Rohit Sharma is said to be at the forefront.