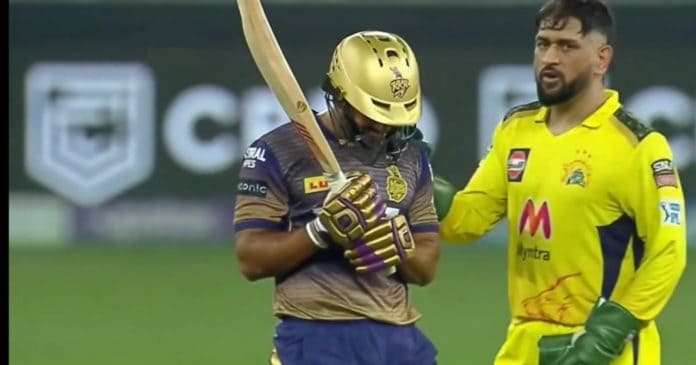 Chennai Super Kings have completed the turnaround of winning IPL 2021 and thereby adding the fourth trophy to its collection. The squad was the first team to be eliminated out of IPL 2020. However, they had decent auctions and were in top form throughout IPL 2021. Hence, CSK is the deserved winner of IPL 2021.

On the other hand, despite the odds being against them, KKR turned up as a different team in the UAE leg. They did well to reach the finals but failed to win the final encounter.

Rahul Tripathi is someone who gives 100% to his team. On the field, he tried to stop an extra run and in the process, pulled his hamstring. Despite this, he came out to bat in the second innings. However, he got out very early. MS Dhoni appreciated Rahul’s dedication on the park. Twitter reacted to this gesture. We take a look at some of the reactions below:

This was beautiful from MS Dhoni to show a nice gesture to Rahul Tripathi. pic.twitter.com/bdg19FDgxc

#CSK #Dhoni sportsmanship 👌👌 #MSD consoling an injured Rahul Tripathi after he was dismissed!

That hand by Dhoni on Rahul Tripathi’s back after he got out is what makes him so special. He has won trophies like others, but he has won the right way. Always, played the right way. For India and #CSK. Probably, ends his playing career with another #IPLFinal win and trophy.

The way Dhoni pats on Rahul Tripathi shows the love 💛💛

This was beautiful from @msdhoni Dhoni to show a nice gesture to Rahul Tripathi. pic.twitter.com/c6lId2KIR9

This was a beautiful gesture from dhoni to Rahul tripathi.struggling with his leg,the way he tried to loft was 👏.that's thala dhoni for you♥️. pic.twitter.com/Ejss8372QK