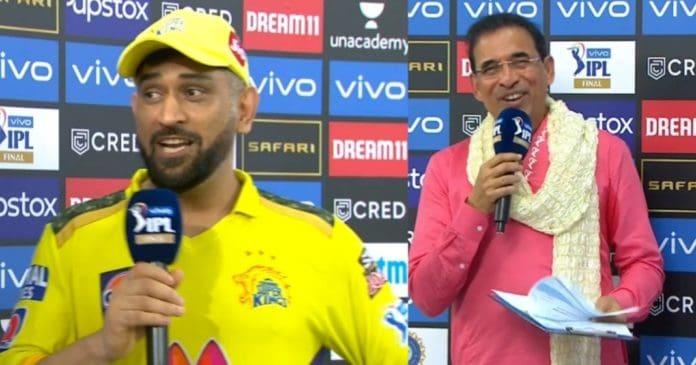 Chennai Super Kings completed a 27-run victory over Kolkata Knight Riders in the finals of IPL 2021 to lift the trophy for the fourth item. MS Dhoni also provided a cryptic update about his future in his trademark style. In this article, we take a look at how Twitter reacted to MS Dhoni‘s “Still I haven’t left it behind” comment after the final of IPL 2021.

“Still I haven’t left it behind”

CSK was the first team to be eliminated from IPL 2020. However, the MS Dhoni-led squad won IPL 2021 and therefore, completed a remarkable turnaround.

In the post-match presentation ceremony, MSD gave an update about his future. Harsha Bhogle said, “legacy you have left behind for Chennai Super Kings” and to this, Dhoni smilingly replied, “But still I haven’t left it behind…”. A couple of days ago, Dhoni said in a fan interaction event that he would like to play in Chepauk. One of the India Cements officials also reportedly confirmed that MS Dhoni would be retained. Now, MSD himself giving a hint has got the fans excited.

MS Dhoni is the face of Chennai Super Kings. In Qualifier 1, he showed flashes of his previous self. However, he did not get a chance to bat in the final. The fans will be ecstatic if Dhoni continues to play. The followers in India could watch as IPL 2022 is likely to be held in India. We take a look at a few of the Twitter reactions to MSD’s latest comment:

Harsha Bhogle: You can really be proud of the legacy you have left behind

MS Dhoni: (smiles): I haven’t left it behind

Thank you @bhogleharsha for one of the best post match presentations.#IPLFinal

MS Dhoni and Harsha Bhogle – What a combination ❤️

Harsha Bhogle: “And you can be so proud of the legacy that you’ve left behind for Chennai Super Kings, and they can build on it. Ladies and Gentlemen. What a man. What a leader. MS Dhoni.”

Harsha Bhogle: You can really be proud of the legacy you have left behind