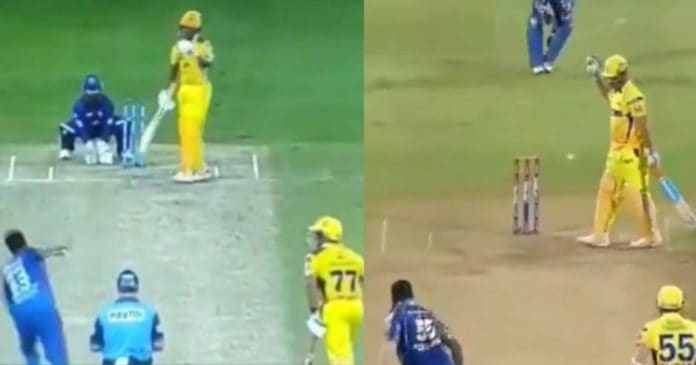 Ruturaj Gaikwad and R Ashwin were involved in an interesting battle in Qualifier 1 of IPL 2021. Both had a go against each other, albeit in a light way. In this article, we take a look at the Twitter reactions to CSK opener’s Ruturaj Gaikwad’s tit-for-tat act on R Ashwin in Qualifier 1.

CSK start well in the chase of 173

Delhi Capitals were put in to bat first and actually started well. However, with a few quick wickets, they were put under pressure. DC was playing a batsman short and hence, they promoted Axar Patel. However, the move did not pay any dividends. Later, Rishabh Pant and Shimron Hetmyer played responsibly to help DC post a total of 172 runs on the board.

Although they lost the big wicket of Faf du Plessis very early, Ruturaj Gaikwad and Robin Uthappa steadied the ship for CSK. They took calculated risks and put CSK in a winning position. After a long time, Robin Uthappa made a strong comeback with an impressive fifty. The DC bowlers, though, have been inconsistent in the game.

In the ninth over of CSK’s chase, R Ashwin pulled out of bowling after he looked like he had almost completed his action. Robin Uthappa was worried that Ashwin would “mankade” him. However, Ashwin did not do any such attempt.

In the next delivery attempt, although R Ashwin was very close to delivering the ball, it was the batsman Ruturaj Gaikwad who pulled out at the last moment. It was an interesting few minutes at the centre because two players were having a sort of a cold-duel within the game. Ruturaj displayed immense courage there to be himself while batting against an Indian legend. The duo did not have any words regarding this later on after the incident.

Ruturaj Gaikwad was ready with the stance, but Ravi Ashwin stopped and didn't bowl. Following up when Ashwin loaded the delivery, Gaikwad stepped away and didn't let Ashwin bowl.

Ravi Ashwin and Ruturaj Gaikwad from 2021.

Kieron Pollard and MS Dhoni from 2012.

Man!! Ruturaj Gaikwad is daring player stepping out against rashid khan , smacking bowl over Rabada's head and now he is doing Fun against Ashwin.#CSKvDC

big fan of Ruturaj for what he did to Ashwin there

Ruturaj should say sorry and apologise to senior player Ashwin.
Our values and culture should be protected in every level 🙏🚩

I clapped for Ruturaj's comeback at Ashwin. Stadium feeling

That was cheeky from Ruturaj Gaikwad!😂 but then that is how you treat someone like Ashwin! Give them a taste of their own medicine. #CSKvDC

Absolutely school level of cricket from Ravi Ashwin to pull out while bowling. Hopefully he doesn't go complain about Ruturaj Gaikwad to umpire #CSKvDC

Ashwin is scared of Ruturaj 🤣🤣