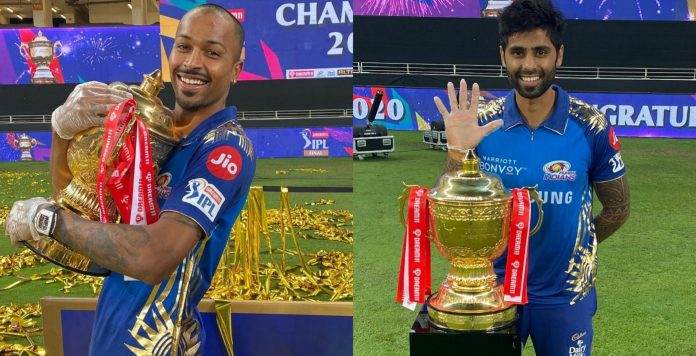 Mumbai Indians had a terrific campaign in 2020. After a wonderful 2019 season where they ended up as winners, not many would have expected them to repeat the feat this year. However, with consistent and dominant performances, MI became only the second team in IPL to defend their title.

The credit for MI’s performance has to go to their batsmen. Almost every game, at least one player stood up, thereby allowing the team to be in the game for all the forty overs. A word of appreciation must be made for the management who strategized their batting order to perfection this season.

While other teams had one or two outstanding batsmen, MI had a bunch of them. In this article, we take a look at the highest number of deliveries faced by MI batsmen in 2020.

Hardik Pandya has a clear role to play at Mumbai Indians. The role defines him to go after the bowling, notwithstanding the game-situation and the conditions. In this edition, the hard-hitting all-rounder faced 157 balls and came out victorious with his displays. On multiple occasions, the talented player accelerated the batting run-rate with his knocks at the death. He stands at No.5 in this list.

Had he not missed the four games, Rohit Sharma would have surely been higher in this list. Nevertheless, Rohit was not needed much for MI this edition. The other batsmen were in good form, and Rohit did a fine job of handling them well. That said, the most important knock for the franchise was played by Rohit himself. The captain was in top form in the final and made sure there were no hurdles. Nevertheless, with 260 balls, Rohit is at No.4 on this table.

Now, how good was Suryakumar Yadav in IPL 2020! Yes, he was known as a talented batsman, but SKY took it to the next level with his showings in this edition. There was not one game where the Mumbai cricketer looked uncomfortable, and when legends around him couldn’t escape it, it was brilliant of SKY to sustain his form. The 30-year-old also chose this season to showcase his wide array of shots. He also added a chunk to his case by letting the viewers understand that he would not crumble under pressure. He did a lot more in IPL 2020, and we must admit that it is just a matter of time before he breaks into the Indian squad.

The highest run-scorer for Mumbai Indians, Ishan Kishan, stands at No. 2 in this list. Although he usually played at No.4, the Jharkand youngster opened the batting when Rohit Sharma was unavailable. Despite missing the first few games, Ishan was quick to prove to the management that they had made a mistake by not picking him in the initial matches. The former U19 skipper exhibited the highest form of fearless batting in this edition. He was absolutely spot-on with his timing and often left the fans surprised that he could smoke it to all the corners of the park. In fact, Ishan even ended the edition as the highest six-hitter in the entire competition. Just like SKY, even Ishan’s India dream is not far away.

Well, if you open the batting for your franchise, you ought to face the highest number of balls. Quinton de Kock did that for 16 games and hence, he stands at the top of this list. The South African captain was instrumental in the squad’s 2019 success and he repeated that in this season. Although he started on a less-destructive note, QDK was quick to adapt to the pitches. Once he came into the groove, there was no stopping him. He delivered on almost every game, and in the crucial segment of the season, he made sure the absence of Rohit Sharma wasn’t felt.

IPL 2020: 5 Positives From This Season For Chennai Super Kings (CSK)