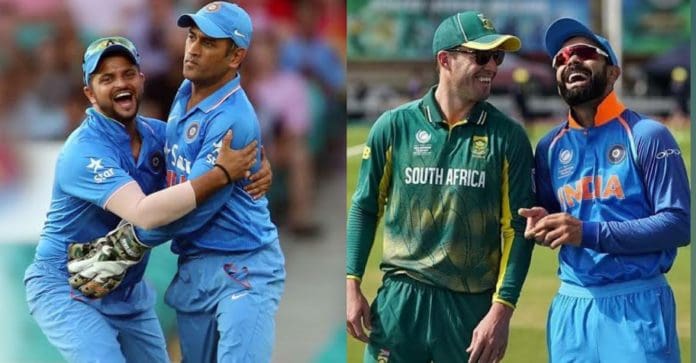 Cricketers have become global celebrities because of the constant development of the game. The sport now involves more money than ever. Also, the fan-following of cricket has been on the rise because of the growth of several T20 leagues across the world. International cricket has dominated as always among the fans as most members of the cricket universe closely follow the ICC events.

Meanwhile, there is also a portion of the cricket universe that is more interested in the leagues and glamor involved around the game. Cricketers have gained more fame and money than ever. While rivalries are present on the field and sometimes inside the team as well, on the occasion of Friendship Day, let’s have a look at the following five pairs of cricketers who are best friends off the field.

MS Dhoni and Suresh Raina are a pair of cricketers who retired from international cricket on the same day. In fact, Suresh has also stated that he will have zero interest in participating in the Indian Premier League if Dhoni decides to end his IPL career.

Raina and Dhoni have had many memorable partnerships on the field. Their match-winning partnership in a tricky run-chase against Zimbabwe in the 2015 Cricket World Cup is a partnership that is very close to the hearts of all cricket fans.

Ten years have passed and now Kohli and de Villiers are the best of the friends. Their bromance has wowed the cricket universe, and they have destroyed many bowling attacks together while donning the RCB jersey.

Another pair of batters to appear on this list is of the former Indian cricket team openers Sachin Tendulkar and Sourav Ganguly. Both have a great friendship off the field.

Tendulkar and Ganguly are two of the legendary cricketers to have played for India. Their partnership and friendship has millions of fans.

KL Rahul and Mayank Agarwal is yet another pair of Indian batsmen who opened the innings on this list. Rahul and Agarwal play for the Punjab Kings.

They have had great moments while playing for the Karnataka cricket team in domestic arena. Both are now regular members of the Indian team.

Yuvraj Singh and Harbhajan Singh have been best friends for a long time. Both have won many matches, series and global tourneys together. Yuvraj is a left-handed batsman and a left-arm spinner, while Harbhajan bowls right-arm off-spin and bats right-handed.

Both are legends in the IPL. They have achieved much success in the league, but Yuvraj and Harbhajan never got to play together in the IPL. In 2007 and 2011, they won the T20 World Cup and ICC World Cup together with Team India.

5 Active Cricketers Who Could Become Great Commentators In The Future