Home IPL 2021 5 players who can replace Jos Buttler if he misses second phase... 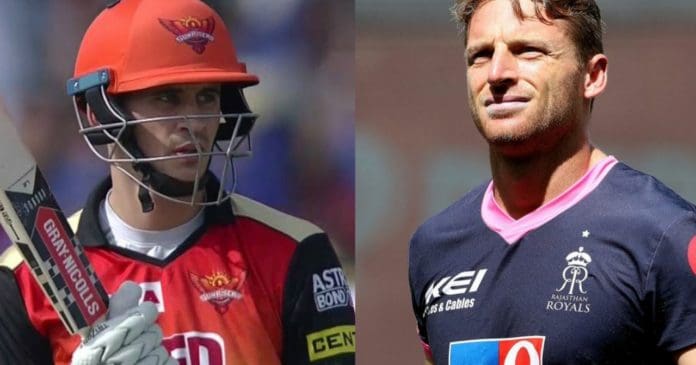 The Rajasthan Royals might have to play in the second phase of IPL 2021 without their top English stars. Jofra Archer is already out of the competition because of an injury, while Ben Stokes has taken an indefinite break from cricket. Now, it seems Jos Buttler will also miss the remaining matches of IPL 2021.

The reason behind it is Buttler’s wife is expecting a child. Hence, the English wicket-keeper batsman will likely stay back at home to accompany his wife. Buttler is a key member of the Rajasthan Royals squad. In his last match of IPL 2021, Buttler smashed a phenomenal century against the Sunrisers Hyderabad. The Jaipur-based franchise will have to target a similar type of batting option as a replacement for Jos The Boss.

In this listicle today, we will have a look at five players the Rajasthan Royals can target as a replacement in case Jos Buttler misses out on IPL 2021.

Alex Hales is a right-handed batsman from England. He has not played international cricket for a considerable time, but he has been doing well in the T20 leagues across the world.

After seeing Alex’s success in the leagues, many fans expected IPL teams to bid for him at IPL Auction 2021. However, the same did not happen as Alex went unsold in IPL Auction. Perhaps, he can now come back as a replacement.

Another hard-hitting batsman available in the list of unsold players is Evin Lewis. The left-handed batsman from the West Indies has represented the Mumbai Indians in the Indian Premier League before.

Lewis looked in good touch during the home season of the West Indies team. Rajasthan Royals can target him and add a left-hander to their batting lineup.

Devon Conway has become the talk of the town ever since his international debut. The left-handed batsman has performed exceptionally well for New Zealand.

He was born in South Africa, but now he plays for the Blackcaps. If RR show interest in him, Conway can make his IPL debut this year only. For the record, Conway has amassed 3,555 runs in 106 T20 matches, with his highest score being 105*.

Rajasthan Royals have Sanju Samson as the wicket-keeping option. However, if they need a wicket-keeper batsman replacement for Jos Buttler, they can go for Kusal Perera.

The Sri Lankan player has been a top performer for his team in international cricket. Also, Perera has played for the Rajasthan Royals in the past.

The wildcard option on this list is Singapore’s Tim David. The rising star has done well in the Big Bash League as well as the Pakistan Super League.

David scored well in PSL 2021’s second phase, played in the United Arab Emirates. So far in his T20 career, the 25-year-old has scored 1,171 runs at a strike rate of 155.09. Also, he bowls right-arm off-spin and has taken five wickets in 13 T20 innings. Thus, he could be a wildcard pick as a replacement for Jos Buttler.