Home IPL 2022 6 Cricketers Who Played Less Matches But Still Got Retained Before IPL... 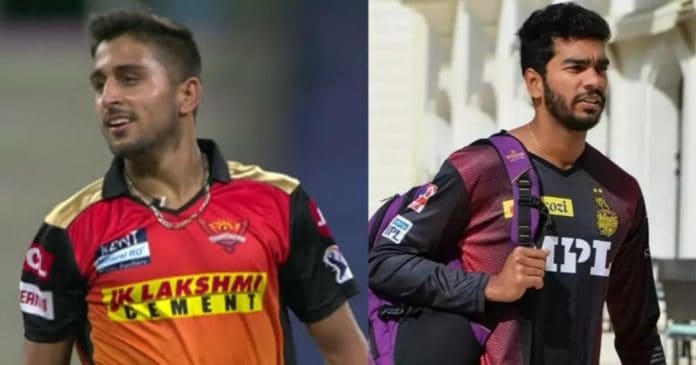 IPL 2022 retentions were announced on Tuesday. There has been the talk of a mega-auction not happening after 2022, and a few teams might have reacted to it. In this article, we take a look at six cricketers who played less matches but still got retained before IPL 2022 mega-auction.

Retention before a mega-auctions is very important for the success of a franchise. Usually, a team prefers well-known and established cricketers to retain before the mega bidding event. However, we have witnessed a few teams making bold moves before IPL 2022. We take a look at players who have been retained despite not having played many encounters.

Umran Malik impressed many with his pace in the UAE leg of IPL 2021. He played just three games but many experts pointed out that there is potential in him. SRH has taken a big bet by retaining the young speedster from Jammu & Kashmir. It needs to be seen if he would live up to the expectations.

Venkatesh Iyer is one of the players who got retained before the IPL 2022 mega-auction. The Madhya Pradesh cricketer made his IPL debut in UAE recently. He did well with the bat and also looked decent with the ball. His form pushed KKR into the finals. Since he is a multi-utility cricketer, KKR retained him by offering INR 8 cr. This is despite the player yet to have got a chance to play IPL cricket in India.

Rajasthan Royals has retained Yashasvi Jaiswal in the uncapped category. Although the start to his career in IPL was rough, the Mumbai opener later picked up in the competition. He exhibited fine hitting skills in the UAE leg of IPL 2021. A youngster, it was understandable that RR has retained him despite the player being part of only 13 IPL games so far. He is certain to partner with Jos Buttler at the top of the order for IPL 2022 and beyond. Yashasvi also offers a bit of leg spin and RR might have considered this as well.

Ruturaj Gaikwad made his IPL debut only in the latter stages of IPL 2020. Yet, he is already an accomplished name in the competition. He won the Orange Cap in IPL 2021, and CSK has done the obvious by retaining him before the upcoming campaign.

It does not seem that Abdul Samad has played 23 games in IPL. It is probably because, in many encounters, Samad got very little chance to showcase his skills. He is a brute hitter of the ball and has immense potential. Abdul also contributes with the ball in hand. Therefore, SRH could have gone in with the youngster.

Arshdeep Singh picked 18 wickets in IPL 2021. It did not look like he is fairly new to the competition. Arshdeep was composed even when he was under pressure. This might have prompted PBKS to retain him despite the sample size being very low for a bowler.