Home IPL 2022 “Every players’ dream to play under his captaincy” – Dewald Brevis points... 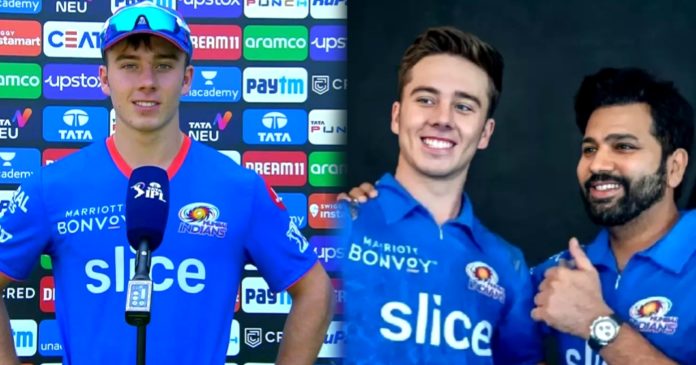 Mumbai Indians young superstar batsman Dewald Brevis has given a big reaction to his team captain Rohit Sharma. Brevis has said that Rohit Sharma is a very good captain and every player dreams to play under the captaincy of Rohit Sharma.

Even before the IPL 2022 auction, Dewald Brevis was in the news and it benefited him a lot. Mumbai Indians included Dewald Brevis into their team for Rs 3 crore. He played some great innings while playing for Mumbai Indians and hit 11 long sixes. He impressed everyone with his hitting as he scored a total of 161 runs in IPL 2022.

During a conversation on the Twitter page of Mumbai Indians, Dewald Brevis praised Rohit Sharma’s captaincy. He said that according to him, almost every player wants to play under the captaincy of Rohit Sharma. He added that Rohit supports everyone and doesn’t put any pressure as he wants one to enjoy and play natural game.

“I think it’s a player’s dream to play under his captaincy. He really backs you and there’s no pressure he puts on you. He wants you to go out there and enjoy it and to be yourself and to have fun on the field,” said the South African youngster.

Dewald Brevis on how #MI fought back in the second half after a tough start and his dream of playing under Captain RO 💙#OneFamily #DilKholKe #MumbaiIndians @BrevisDewald @ImRo45 pic.twitter.com/4rNH43ozur

Earlier, Dewald Brevis had said that Mumbai Indians has always been one of his favorite teams, as here, almost all the big players live together like a family.