Home IPL 2022 “Chahal Might Not Make It To The Auctions” – Aakash Chopra Suggests... 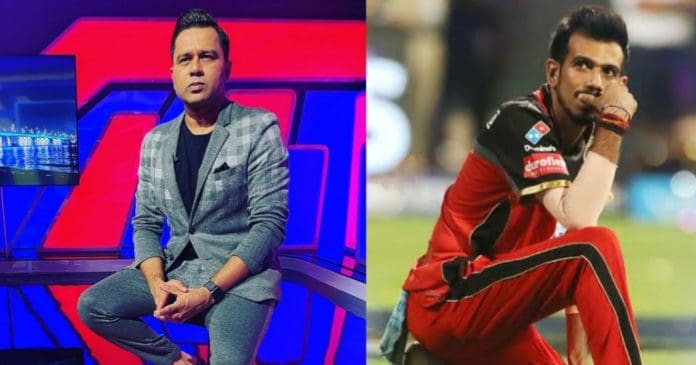 Aakash Chopra has made a big statement that Yuzvendra Chahal might not make it to the auctions. The former cricketer went further and suggested a replacement whom RCB will target at the auctions.

One of the surprising decisions made by RCB was to release Yuzvendra Chahal to the auctions. He is the team’s highest wicket-taker and did well at the Chinnaswamy Stadium, a place that is not very favourable to the bowlers.

Aakash Chopra, while doing a Q&A session on his Youtube Channel, admitted that one of the two new teams might target Yuzi. Hence, he might not be available at the auctions for RCB to target.

With Yuzi unavailable, Aakash reckoned that Rahul Chahar might be targeted as his replacement. Talking on his Youtube channel, the former Indian opener said, “RCB will not get Rashid, they can forget about that. Instead, they will go after Rahul Chahar, big time. No spinners apart from leg spinners work at the Chinnaswamy stadium. He also bowls a lot quicker in the air.”

He further added, “Ravi Bishnoi is also an option, but I’m thinking Rahul Chahar, they will break the bank for him. Chahal might not make it to the auctions.”

RCB has retained Virat Kohli, Glenn Maxwell and Mohammed Siraj ahead of IPL 2022 Auctions. The core looks strong, but the franchise will want to make a few good additions at the auctions. Especially with the tournament likely to return to India, RCB would focus on building a strong bowling attack, which they have always lacked in the tournament. They will also be in search of a captain. Virat Kohli had announced that he would not captain RCB from the next season.