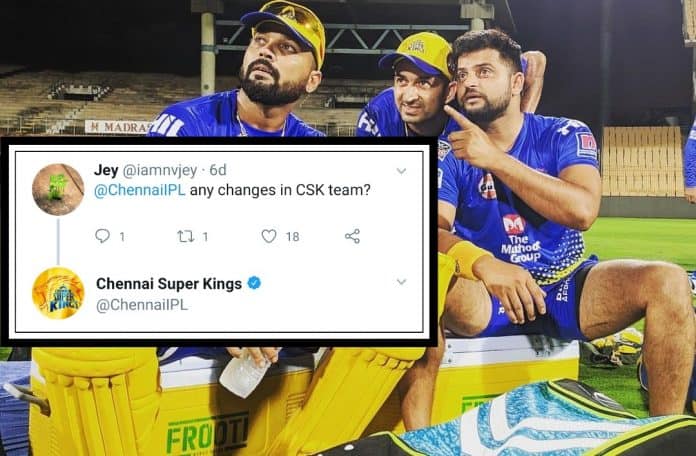 Chennai Super King’s gives an epic reply to fan when asked about changes in CSK .

Csk while reading the word itself brings me the noise of million people in the stands. Chennai super kings in not just a team but a family which crossed arduous journey but still sticking to the same people. It has the huge fan base all over the globe and one of the most popular franchise with a brand value of 732 crores.

The yellow army remembers the mighty Aussies which always making into the finals of icc tournaments. There is a famous term about ipl where seven teams play against each other to meet Chennai Super Kings in the playoff. Yes , this quote only suits for men in yellow. They yellow army never missed the playoff in each and every seasons they have played.

After coming back in to the auction csk retained majority of csk players to its den. But the average age of the csk players is above 30 which got lot of criticism and often called as daddies Army. At Last Mahi bhai back as a captain lifted the third ipl Trophy.
After loosing the 2019 edition by 1run csk fans were disappointed and it’s their batting performances were poor throughout the series.

Looking ahead of upcoming season csk has only 3.2 crores in the purse and the trade option is going to end by November 14. So a fan was asked in Twitter whether they are going for a change. “Any Changes in CSK ?”

@ChennaiIPL any changes in CSK team?

The official Twitter handle of Chennai Super King’s gave them an epic reply ”yes! Daddies army will be a year older”.

Yes. The Daddies Army will be a year older. 💛

This shows the unity of the team sorry it’s a family. Lets hope daddies army will bring us another trophy.