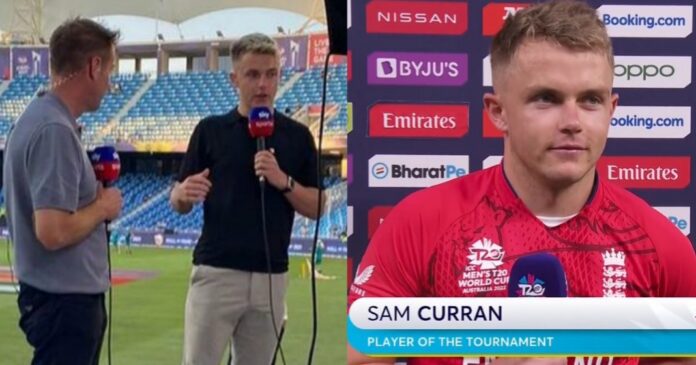 There were a lot of contenders for this trophy. Some of the big names such as Virat Kohli and Suryakumar Yadav were also a part of the list of contenders. However, in the end, it was the young Sam Curran who went away with the award. Interestingly, despite being an all-rounder, Curran won the award solely due to his bowling performances.

Curran missed the 2021 T20 World Cup due to injury. However, he came back strong to win the Man of the Series in 2022 T20 World Cup. Here is what Twitter had to say about Curran’s success:

Sam Curran in 2021: Commentator during the T20 World Cup.

Sam Curran in 2022: Won the player of the tournament in T20 World Cup. pic.twitter.com/x0BrXXnAvq

A well deserved double-winner of Player of the Match and Player of the Tournament trophies. Sam Curran has been exceptional for England in this #T20WorldCup. pic.twitter.com/kHhNTRIGBa

…yet he didn't make the ICC Team of the Tournament! 😂#T20WorldCup | #T20WorldCupFinal pic.twitter.com/djfMDDYdoL

Sam Curran is Player of The Tournament. He took 13 wickets in tournament for an average of 11.38 and economy of just 6.52. Most deserved.

Sam Curran becomes the first ever Player of the Tournament in a Men's T20 World Cup due to only bowling performance.

Sam Curran is the player of the tournament at his first World Cuphttps://t.co/Wu4ESgrCn5

Bowlers are so often overshadowed by batting pyrotechnics in T20 cricket. How wonderful to see Sam Curran named player of the match and tournament. #T20WorldCupFinal #T20WorldCup #PAKvENG https://t.co/tdXvuX5FW2