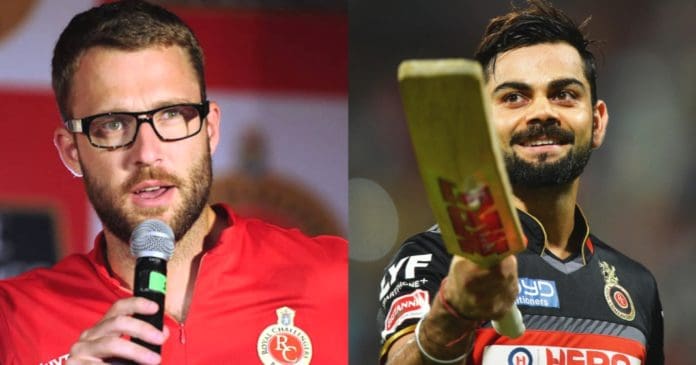 It will a new beginning for all of the Indian Premier League (IPL) franchise starting from 2022 as a reset button is set to be triggered.

The Board of Control for Cricket in India (BCCI) has confirmed that each of the existing 8 IPL franchises can retain upto 4 players, with various combinations of Indian and overseas players.

Each have been given a time period of about 45 days to finalize their retentions and submit to the BCCI, the deadline for which is November 30.

Royal Challengers Bangalore will have a tough task of picking the 4 players from a star-studded squad that they have.

The former New Zealand skipper Daniel Vettori, who has also coached the RCB team in the IPL, has picked the 4 players that the franchise should retain.

He stated to ESPNcricinfo that AB de Villiers’ retirement has made it a bit easy for the Bangalore based side to choose the 4 players.

He selected Virat Kohli, Yuzvendra Chahal, Glenn Maxwell and Harshal Patel as the 4 players that the franchise should retain.

He stated that had it been 18 months before, Yuzvendra Chahal might have not made it, but looking at his recent performance, he gets the nod. However, Virat Kohli should get the first slot.

Virat Kohli is always a no doubt for RCB management. Harshal Patel won the Purple Cap this IPL 2021, thus is a question selection. Whereas, Glenn Maxwell, who have struggled to get settled in a IPL franchise, has had the best season of his IPL career with the RCB team.

The Australian all-rounder featured in 15 matches for RCB and scored a massive 513 runs and also chipped in with 3 wickets as well. Whereas, it was Yuzvendra Chahal who didn’t had a great IPL 2021 when it was being played in India, however, he turned things around in UAE, as he picked up 18 wickets from 15 matches.