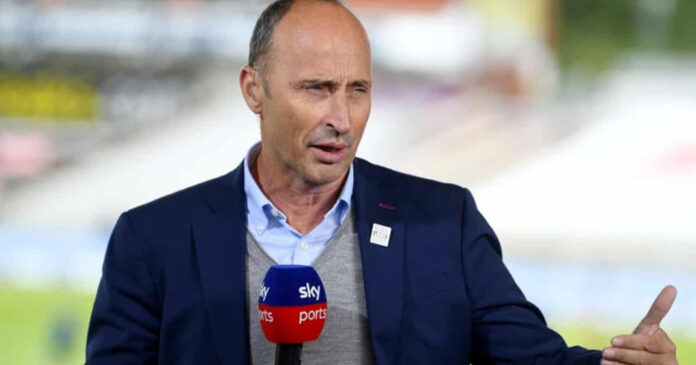 A Pakistani fan was trying to create unnecessary controversy around the match after India thrashed Pakistan in the much-awaited clash at the T20 World Cup 2022 on Sunday (October 23). He used a fake quote claiming England commentator Nasser Hussain to have said it.

However, the English commentator was quick to respond and cleared the air by mentioning that the quote that was being used was absolutely fake. Hussain even asked the user to delete the post and not try to demean a great match between two of the cricketing giants.

Batting first, Pakistan had a horrible start as their captain Babar Azam departed for a golden duck and Mohammed Rizwan could only score four. However, Shan Masood and Iftikhar Ahmed showed some resistance to score half-centuries. But the rest of the batters fell down like cards.

Shaheen Afridi smashed a couple of boundaries to help his side reach 159 in 20 overs. Arshdeep Singh and Hardik Pandya picked up three wickets each.

In reply, the Men in Blue also lost both of their openers in an early phase. Even the in-form Suryakumar Yadav and the left-handed batter Axar Patel had an off-day. As required, Virat Kohli and Hardik Pandya stitched a partnership before starting to target bowlers. With 48 required off the last three overs, Kohli shifted his gears to smash bowlers all-round the park.

Kohli smashed an unbeaten 82 off just 53 balls with the help of 6 fours and 4 sixes to take India over the line. It was a memorable win for them, especially on the eve of Diwali. The 33-year-old called it his best T20I innings ever despite having played numerous match-winning knocks.

Rohit Sharma’s side will next play the Netherlands on Thursday (October 27) before another big clash against South Africa on Sunday (October 30).