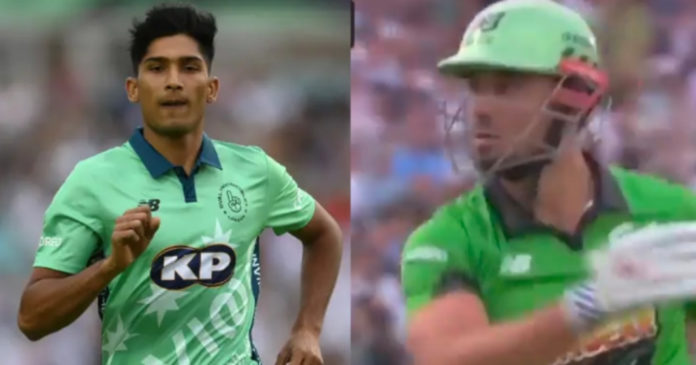 Pakistani pacer Mohammad Hasnain has had his suffering in January this year after he was reported by a BBL umpire for having an illegal bowling action. As a result, he had to undergo tests and work on his action to be able to play again. But now another controversy has sparked regarding his bowling action.

This time, the Australian batter Marcus Stoinis seemingly accused Pakistani pacer Mohammad Hasnain of an illegal bowling action. The incident happened on 14th August in the game between Oval Invincibles and the Southern Brave in the ongoing Hundred tournament.

The right-handed batter tried to smash Hasnain’s bouncer over the fence but ended up mistiming the ball and handling a simple catch to Will Jacks at mid-off. While walking back to the pavilion, Stoinis was seen imitating the pacer’s bowling action to be a chucking one. Unhappy with the gesture, fans criticised the Australian all-rounder for questioning Hasnain’s bowling action.

Will Jacks, who scored 108 off 48 balls including 10 fours and eight sixes, was the star player of the match. With this win, Oval Invincibles move to the second position in the points table. On the other hand, things are get tight for the Southen Brave as they have managed to register just a single win in their four encounters.

Just a year ago, the 22-year-old pacer was accused for possessing an illegal bowling action by Sydney Sixers captain Moises Henriques during a Sydney Smash contest at the SCG. Henriques shouted “Nice throw, mate” to Hasnain after the pacer unleashed a bouncer to the former.

Mohammad Hasnain is one of the fastest bowlers in the world today and a promising talent to watch out for the the future. He has represented Pakistan in eight ODIs and 18 T20I, picking up 29 wickets combinedly.