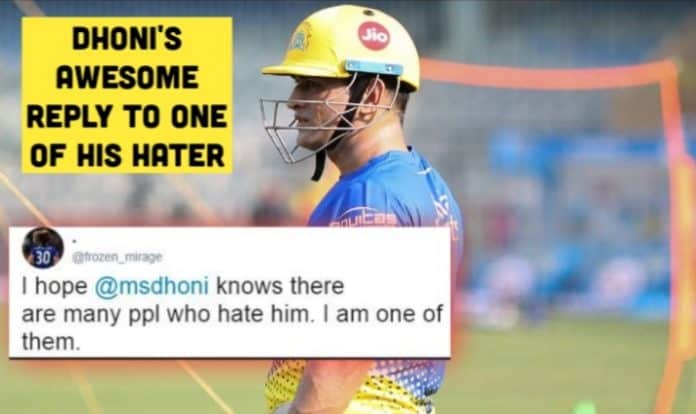 The Real Reason Behind His Reply!

The most common way which celebrities use to interact with people is obviously social media. And Twitter stands top among the list to connect both of them. Various celebrities often have chat sessions on Twitter; especially cricketers. Cricketers like Virender Sehwag are always active in Twitter!!

But MS Dhoni who isn’t active on social media often, was active on that particular day. The man who is always calm on field, replied in a very special way. That reply was very calm and composed; such that it made his hater go speechless. And that reply tweet from him went viral everywhere! This was the the tweet from his hater.

“@gautambalgi I hope @msdhoni knows there are many ppl who hate him. I am one of them.”

Generally ‘Captain Cool’ does not give his reply with words; instead he is known for the reply he gives on field every time someone criticizes him. Every time people criticize him, he replies stronger in his upcoming innings.

The Epic Reply From Dhoni

But the same didn’t happen that time. He was quite disturbed with that tweet which made him to give a reply. And that reply turned out to be a sensational one. Here’s the reply which he gave.

“@ishangodbole well you may not like me but hate is a very strong word to be used anyways it’s ur choice so I won’t complain.”

This reply was so simple such that it made that hater go speechless. He couldn’t give a reply to him as he was offended with that reply. Although this is a rare incident to see, he proved that he can give reply with words too.