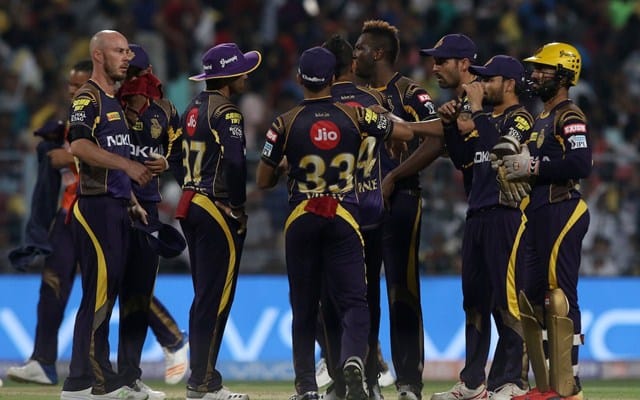 The 3rd match of 2018 IPL season was between Kolkata Knight Riders (KKR) and Royal Challengers Bangalore (RCB). KKR had won the toss and chose to bowl first. The RCB opener Quinton de Kock did not have a great start as he departed for just 4 runs. The other opener B McCullum was on fire. He made 43 off 27 balls before being removed by S Narine.

RCB skipper V Kohli was struggling to get his touch but made 31(33). AB de Villiers as usual made an impact with his 23 ball 44. Nitish Rana took both the big wickets in back to back deliveries. At the end, Mandeep Singh  made a quick fire 37 off 18 , taking the team score to 176 for 7. From the KKR’s bowling unit Nitish Rana (2/11) and Vinay Kumar (2/30) took two wickets each.

This target was seen very easy with the start S Narine gave KKR. The other opener Chris Lynn went back to the pavilion for just 5 runs. S Narine made a 17 ball half-century. His innings ended with 4 fours and 5 sixes. Robin Uthappa didn’t stay in the field for a long time. KKR skipper D Karthik along with N Rana played responsible knocks to build on a much needed partnership. Rana got out after scoring 34 from 25 balls. D Kathik finished the game with 29 ball 35, winning the 1st match as skipper of KKR in the very 1st match.

Just In : Celebrations in Bangladesh after KKR won the 1st match at Eden Gardens vs RCB. #KKRvRCB

Wow. Washington Sundar before this match hasn't conceded more than 30 runs in any t20. Today he conceded 48. Only RCB can make it happen. #PlayBold #KKRvRCB

KKR win by 4 wickets. It's still a long tournament and we now head 🏠to the Chinnaswamy 🏟️!
Baz, AB, Mandy,Umesh and Woakes still put in inspiring shows for us to carry back to Bengaluru 👏
Bring on #KXIP. #PlayBold #KKRvRCB #RCB

RCB to play PSL for a chance to lift the title.

Sometimes low budget movies turn out to be the best ones. #NitishRana #KKRvRCB

KKR won the match but this pic won the hearts !!#KKRvRCB pic.twitter.com/onqCZXR4Vu

Sunil Narine, MoM – "Whatever the team requires of me, I am ready to do. Whether it's bat up the order or down the order."#KKRvRCB #IPL #IPL11 #IPL2018

There is this keen calmness about DK, which makes him special and has made him the kind of player he is at the moment. This in a way will add immense value to @KKRiders's chances this year #KKRvRCB

Why would you send a lamb to the slaughterhouse? But someday the hunter also becomes hunted. Nitish Rana….tell this story to your grand kids 😊🙏 #KKRvRCB #IPL

Looked like a very risky move but it has paid off and like how. Nitish Rana has got AB De villiers and Kohli in successive balls. This is something worth telling his grandchildren #KKRvRCB

I was curious to see the Batting order for @KKRiders ,obviously they seem to have got it right, in control throughout #KKRvRCB #BESTvsBEST #IPL

Happy beginning for the two new captains, Ashwin and Dinesh Karthik. KL Rahul for Punjab and Narine for KKR setting up the chase beautifully in the first 6 overs #KKRvRCB